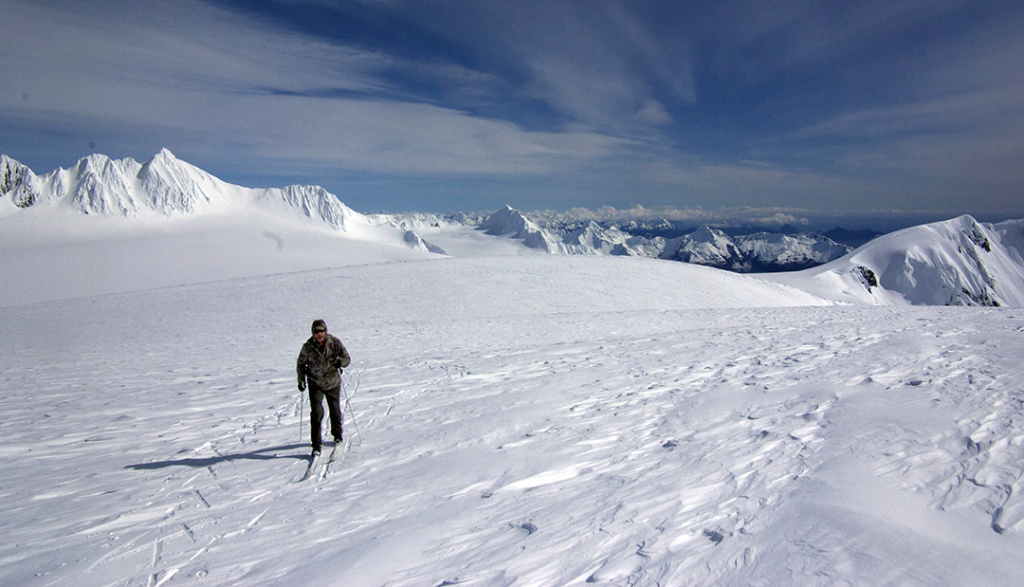 June 9, 2016
In April we were notified of an ongoing rescue operation taking place in Alaska. Two skiers stranded on a glacier were buried deep inside of a 5’x7’ snow cave as a blizzard pummeled them with heavy snow. With no sign of clearing weather and rescue helicopters unable to land safely in the area, their only lifeline was an inReach. After four arduous days on the glacier with barely enough food to stay alive, Chris Hanna and Jenny Neyman were rescued through the brave efforts of a lengthy search and rescue operation.

We are happy to welcome Jenny to the blog to give her account of the harrowing events that took place in April.

Weather conditions were clear, calm and sunny on April 8th as Chris Hanna and Jenny Neyman set out on a one-day ski. Harding Icefield as seen from a friend’s plane after dropping them off. Photo courtesy of Jay Mahan.

Location, location, location. As important as that factor is in real estate, it’s even more so in search and rescue operations. Had it not been for Chris Hanna’s inReach, he and I would still be buried in the Harding Icefield.

The Harding covers 700 square miles of Alaska’s Kenai Peninsula, south of Anchorage. The vast, barren plain of ice sits at about 4,250 feet elevation and is studded with nunataks — mountain peaks jutting from the ice — and circled by more than 30 outflowing glaciers. In April, Chris and I decided to take advantage of a rare weather forecast calling for blue skies, mild temperatures, calm winds and no storms on the immediate horizon, to fly up for the afternoon to ski.

A friend shuttled us from Soldotna up to a spot overlooking the Kenai Fjords and we spent four hours skiing and gaping at the views that were usually — from below — lost to clouds and imagination. Our pilot was scheduled to pick us up at 5 p.m., but by 2 p.m. we noticed the sky getting hazy. Storms can form quickly when wet sea air meets such a dense mass of ice, but we didn’t realize just how quickly.  By 2:15 p.m., clouds were forming around the nunataks. By 2:30 p.m., a dense ceiling of clouds was descending around us and the wind was starting to howl.

Chris Hanna of Soldotna, Alaska skis on the Harding Icefield with Kenai Fjords and mountains surrounding Seward in the background. Photo courtesy of Jenny Neyman.

Chris used his inReach to text our pilot, but by the time he got airborne and covered the 50 miles to our location, there was no way he could land. The only way on or off the icefield by foot is through the valleys carved by outflowing glaciers. That means navigating crevasse and steep descents. There is one established trail, climbing a ridge alongside Exit Glacier west of the seaside town of Seward, 20 miles north of our location. In favorable conditions — with good visibility and little snow — it’s a relatively safe descent. In avalanche conditions and a whiteout blizzard, its safety is more theoretical than dependable, but it was our only option for getting ourselves to safety.

We suited up in our winter gear, secured our emergency camping gear in our pulk sled and started to ski. Winds picked up to 25 mph, visibility dropped to under 10 feet and we could only navigate via GPS. By 8:30 p.m., we’d only covered six miles and decided to pitch our tent to wait out the storm. We texted our pilot about our decision and sent out one of Chris’ preset messages, “Staying here for the night,” to his inReach contacts. By the next morning, the storm was even worse and it was apparent our tent was in danger of being crushed in the ever-increasing snow. Chris sent a message to his in-case-of-emergency contact, asking him to appraise search and rescue of our location and situation, should we end up having to make the SOS call.

By 4:30 p.m., it was clear we weren’t going to be able to save the tent. We sent an SOS and got a response that search and rescue knew our location and would reach us as soon as the storm would allow. That communication gave us the reassurance we desperately needed. We were stranded, not lost, so could focus on shelter instead of setting off into the storm in the slim hope of being found.

Lacking a shovel, Chris dug a snow cave by hand in 45-mph winds, plummeting temperatures and relentless snow. We salvaged everything we could from the tent, loaded all our gear and ourselves into our new shelter and held our backpacks in the entry to block the wind. The drifting snow sealed the hole shut within two minutes. It would be four days before it opened again.

Buried five feet deep in a 7-by-5-foot cave, Chris’ inReach was our lifeline to the outside world. We were able to communicate the status of our health — hypothermic but stable — and supplies — three days of food with strict rationing, and the capacity to use body heat to melt snow for water. With every message sent, we knew our exact coordinates were being transmitted, as well. Chris had stuck a ski in the snow to mark the entry to our cave and shoved a reflective emergency blanket out an air hole to serve as a flag, but those visual markers alone would not have been enough for rescue crews to locate us amid the vast, empty, windswept expanse of ice and snow

The interior of the snowcave in which Chris Hanna and Jenny Neyman spent four days on the Harding Icefield. It became progressively smaller over the four days they spent stranded inside, with snow expanding as it soaked up moisture. Photo courtesy of Chris Hanna.

At 12:30 p.m. on our fourth day in the cave, an Air National Guard helicopter was able to take advantage of a brief break in the storm to land at our location, dig us out of our cave and take us home. If not for inReach, they never would have found us. Equally as important — we wouldn’t have been able to make the safe choice and remain in our shelter, but would have had to push our wet, dehydrated, calorie-deficient, hypothermic bodies back out into the storm.

To those of us who live in Alaska and appreciate the wildness it has it store, “get lost” is a welcome expression. But should we get more lost to nature’s whims than intended, having the capacity to get found again with inReach is invaluable.