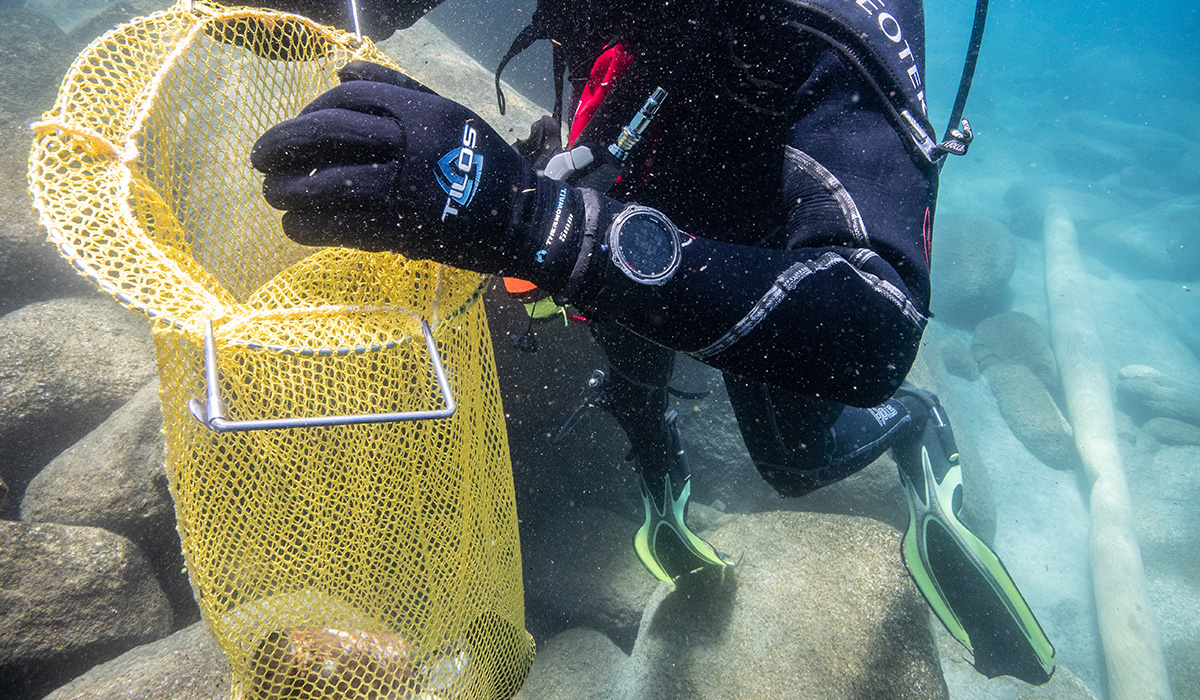 In the last few months, Colin West and his crew have cleaned up 8,122 pounds of trash out of Lake Tahoe. And no, that is not a typo. We, as humans, have deposited more than eight thousand pounds of trash into the largest alpine lake in North America — and West’s organization, aptly named Clean Up the Lake, is only on mile 22 of a 72-mile scuba cleanup.

Clean Up the Lake was born from West’s desire to rid any and all bodies of water of plastics and other waste. The organization was founded in 2018, but really kicked off at Lake Tahoe in May after a philanthropic drive to fund the project, managed by the project’s partner the Tahoe Fund, caught the attention of more than 135 donors as well as Tahoe Blue Vodka, who is sponsoring the cleanup and matched $100,000 in donations. In addition to the staff members needed to run a philanthropy of this size, the effort relies on volunteer scuba divers, free divers, kayakers and more to be able to actually remove the trash from underwater.

On top of his 40-hour weeks spent as the founder and executive director of Clean Up the Lake, West estimates that he also clocks about 24 hours in the water as a volunteer both diving for trash and leading the teams of divers. Each day, he says, the team has at least 10 volunteers in the water working on the cleanup. And thanks to their Garmin diving watches — the team sports a combination of the Descent™ Mk2 and the Descent™ Mk2i with air integration capability — they can track exactly how much progress they’ve made in their 72-mile goal.

“We love our watches and dive computers that Garmin has hooked us up with to get GPS coordinates around the lake, how fast we’re swimming, where our divers are. We typically swim an average of a mile a day,” he says. “There’s so much that this watch can do, it’s been fun trying to learn all of its capabilities. I remember jumping in the water and I had my phone on the boat on one of the first days, and I was like, ‘What? I’m getting Instagram notifications?’ They’re amazing devices, and we’ve been really excited to get to use them.”

West hopes that the team will be able to maintain the average mile-per-day pace and end in mid-November, but they’ll finish when they finish, he says. It’s a lot of trash.

And where has all that trash come from? It’s a byproduct of human presence, and until now, nobody has ever done much about it.

“Plastic bottles, beer cans, wrappers — this trash problem has just been ignored,” he says. “You can find everything from those plastics to the aluminum cans to weird construction pieces or things. Some people like to blame tourists, but I can say personally, being someone that’s probably more familiar with this trash problem, I think that with more humans comes more trash. I’m sitting here pulling up things like a dock light or a lamp, construction trash and things that are from all of us locals as well as trash from recreational activities where one can’t tell who deposited it. In the end it doesn’t matter who’s littering, or whether it’s intentional or accidental — it only matters who is going to do something about it.”

Clean Up the Lake is categorizing the waste they find into 77+ categories in an effort to not only clean, but also to understand where the trash comes from.

“At the end of the day, we don’t want to be cleaning up forever,” says West. “We’re also working with environmental scientists to gather data and educate the public.”

Want to help clean up the lake? Interested parties can donate funds, report trash, apply to be a volunteer diver or apply to be a surface support volunteer. To learn more about Clean Up the Lake and their mission, visit their website here.