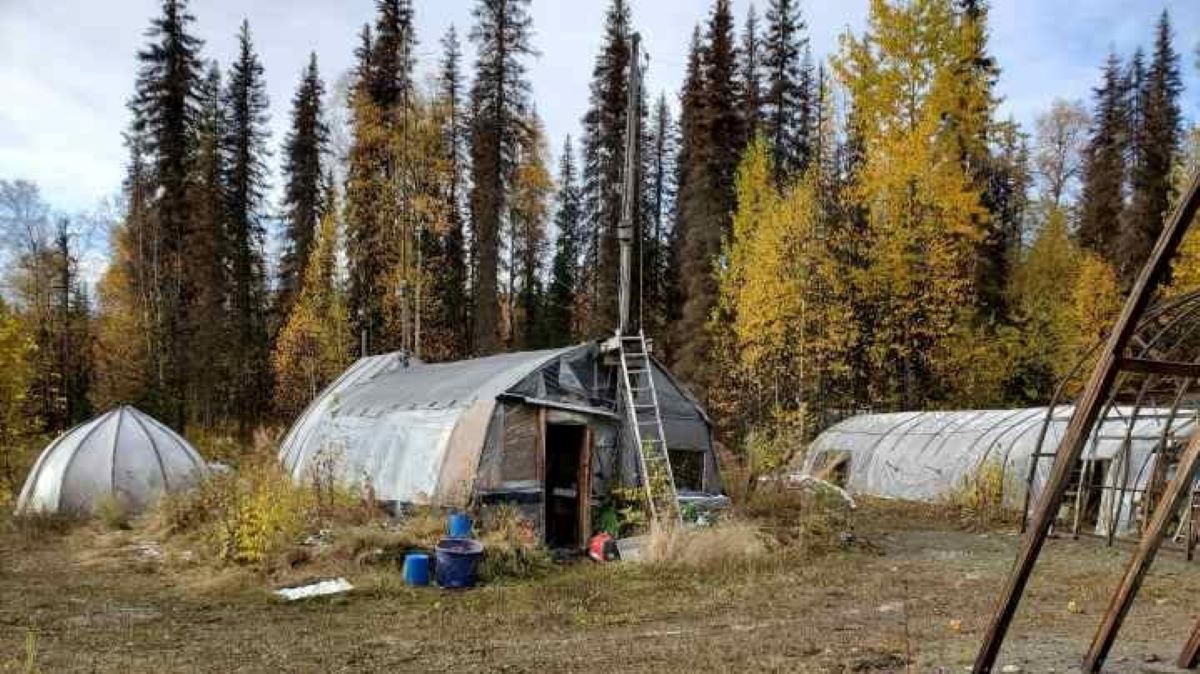 On Dec. 17, it was -15 degrees outside and, after a long day working on his Alaskan homestead, Tyson Steele had forgotten to stoke the woodstove fire before drifting off to sleep. Awoken by a chill in the middle of night, he quickly tossed a big piece of cardboard, some split logs and tinder into the fire and went back to bed.

That decision would unfold into a nightmare that Steele had never envisioned when he bought his little piece of land and homestead in Alaska — a lifelong dream.

He was drifting back to sleep when he noticed a hole in the ceiling and fire coming through. Thinking it wasn’t too serious, he grabbed a fire extinguisher but — puff — it was old, and nothing came out. He went outside to start throwing snow on the fire. That’s when he saw that the whole roof was aflame.

Steele only had seconds to react. He rushed into the shack to grab as much as he could, but everything was already engulfed in flames — including all of his communication devices he had been charging in a row. His radio, cellphone and inReach satellite communication device were gone. So as the roof began to collapse over his head, Steele grabbed blankets, sweaters and other tools within reach, and ran from the burning building.

Within moments, Steele had lost his shelter, communication and — tragically — his dog. When the fire had first started, Steele had ushered his four-legged friend from the fire, but in all of the chaos, the dog never made it out.

For a moment, wearing just long johns and winter boots without socks, Steele sank into the snow, watching the flames melt all of his possessions. He realized he never should have thrown the big piece of cardboard in the woodstove, which didn’t have a spark arrester. A spark had probably flown up the chimney and landed on a portion of the roof that was made out of plastic, and the fire had grown from there.

“But I realized that every moment I spent sitting in the snow, just shocked and feeling sorry for myself, was wasting precious time,” Steele said.

He had a two-year supply of food, and it was on fire. Greases and oils in the pantry, and the nearby propane tank, had only intensified the flames. Ultimately, the only food that survived was some canned food, most of which had burst open and started to melt.

After about nine hours shoveling snow onto the fire, Steele took stock of what he did have. Among other things, his survival would depend on how much food he was able to save. He had 60 cans of somewhat edible food — or two cans a day for 30 days.

Prepared for the Worst

Steele’s grandfather and father had both lived in Alaska.

“As I kid, I loved to hear their stories,” Steele said. “I knew that one day I’d make it up to Alaska.”

Six years prior to buying his property, he got a job working at a fishing lodge on Admiralty Island, and later became the winter caretaker. There, he encountered the good and the not-so-good parts about living in Alaska, and he still loved it.

Finally, he bought land. One parcel had an original homestead first built in the 1980s on it, which he planned to fix up over time. It was truly in the middle of nowhere — about 20 miles from the nearest civilization and only accessible by private plane.

So he was devastated when that life went up in flames. But, having spent so much time in Alaska and on winter excursions in remote places, Steele knew he was equipped with the skills to survive.

“It was more of a mental game than a survival game,” he said. “I knew that the key to staying sane was to stay busy, so even though all I wanted to do was cuddle up in my sleeping bag and stay warm, I could only sleep for so long before I needed to get up and do something. So I just kept doing something.”

With the idea of keeping busy in mind, Steele got off his knees on the night of Dec. 17.

Unfortunately, given Steele’s busyness trying to improve the homestead, he had only been periodically checking in with his family — something he would grow to regret. He had told his family not to worry if they didn’t hear from him, and had last checked in with his parents and told them he was OK the day before the fire. As a result, he knew it could be several weeks before his family raised alarm.

The trek to the nearest civilization was dense with rivers, lakes, forest, deep snow and animals like moose and wolves. With no GPS or map, walking to safety was out of the question.

So besides saving a ration of food, his next order of business was figuring out what to do about his lack of suitable clothing — specifically pants, socks, gloves and a real jacket. It was superbly cold, and would get as cold as -30 degrees in the ensuing weeks. In a shed, he found some old clothes from the previous owner, including an old snowmobile jumpsuit from the 1980s. It was frozen and crumbling, but better than nothing. He found garden gloves to cover his hands.

Next, he got to work re-building a shelter on the ashes of his shack. He used debris, timber and tarps to build the shelter around the still-functioning woodstove.

“Something I learned in a lot of winter camps throughout my life is to just take it slow,” Steele said. “I didn’t have any room for error.”

With just garden gloves, Steele could only hammer in one nail at a time while building the new shelter before he had to get to the fire and warm his hands up for at least 15 minutes.

That fire, too, was imperative. All of his matches and lighters had gone up in flames.

“I had to absolutely, under no circumstances, let it die out,” he said.

That meant Steele had to religiously stoke the fire every three hours — even throughout the night as he was trying to sleep.

“That was the source and the heart of my survival,” he said.

He thought about the fact that if his private pilot or a rescue helicopter did come, they would need a place to land. The only place to do so would be on a nearby frozen lake a half mile away. Every day, he spent time making a trail to the lake, only able to make it 1/8 of a mile at a time before he had to turn back and head to the fire to warm up.

Steele then realized that if someone were to fly overhead and do a welfare check, they might see his makeshift shelter and think he was OK.

“I needed to have some sort of signal that says, ‘I am in trouble,’” Steele said. “Plus I didn’t know if I’d ever collapse and just not be able to go outside and wave my arms.”

He stomped out a big “SOS” message in the snow and filled it in with ash. Often, new snow would fill in the sign, and he’d have to stomp it out again.

All the while — exhausted physically and mentally, cold to the point of frostbite and immensely hungry — Steele tried to stay positive.

“Even more important that staying busy I think — and it’s cliché for me to say this — but was to stay positive and be happy,” Steele said. “But to be happy in all this tragedy I had to consciously see beauty in things.”

He sang carols on Christmas day, tried to find humor in things (like when a moose trampled his SOS sign), and would tally every morning he woke up — celebrating that he had survived another day.

Behind the scenes, though, things were happening. By Jan. 1, Steele’s parents were concerned that they hadn’t heard from their son over the course of two holidays. That was unusual, even if he were busy or having issues with his communication tools.

They contacted the pilot who transported Steele to and from Alaska and asked him to drop off supplies. The pilot was worried the situation could be worse than just a need for supplies, but it was too cold for him to fly, so he suggested contacting the Alaska State Troopers. However, due to weather, even they couldn’t fly until they found a weather window on Jan. 9.

It was Steele’s 23rd day surviving in the Alaskan wilderness with limited food and shelter and no communication when he heard the chopper overhead.

“I instantly knew it was for me,” Steele said.

He started waving his arms and pointed them towards the air strip he had stomped out. He had very little left in his possession, so he simply got in the chopper and flew away to warmth and safety. He was relieved, but sad to leave the place that he had spent years making his own.

Steele bought an inReach Explorer+ years earlier before one of his winter expeditions.

Once, when a boat’s engine broke down while Steele was traveling the open water from Juneau to an island and he became stranded, he used the inReach to communicate his need for help. One year he even used the device as his primary form of communication.

He said he wished he had kept the device clipped on him or in a safe place while at his homestead. If he had the inReach after the fire, he could’ve triggered an SOS and been rescued far sooner.

“That’s actually one of the things I thought about during the 23 days I was up there surviving,” he said. “That I really need to tell people to take care of it and just always make sure their inReach is safe. Even if it’s just a backup, you have to keep it safe.”

He said he would also keep at least a portion of his necessities in a separate location from his shelter, and store non-perishable food in multiple locations.

Steele also advises people who spend time alone in the wilderness, or live in remote areas, to be strict with their communication protocols. He had been having trouble with his generator and sometimes, as a result, was unable to charge his communication devices.

“I should’ve instantly just fixed my generator and charged a device,” he said. “I shouldn’t have waited. I just started to get lax. It got easier and easier to be more and more lax, and that was a bad idea.”

Fortunately, Steele survived and is now able to pass on what he learned from such a major event. Eventually, he plans to return to Alaska and rebuild his homestead, but for now, he’s recovering. And simply celebrating life.

“I’m just really happy to be alive and well,” he said.