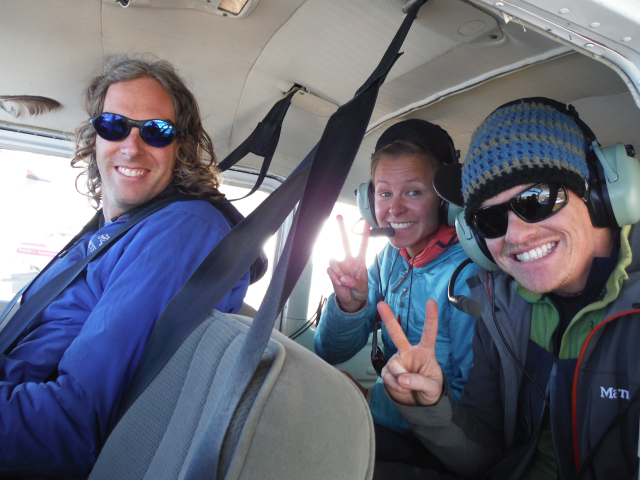 When Conor McManamin dropped off his three friends for a weekend to climb Mt. Marcus Baker on a beautiful spring Friday, none of them could have imagined that they would be coming off the mountain seven days later in a rescue helicopter. What should have been a weekend climb turned into a week of trying to survive in a ferocious winter storm, which eventually dumped about 15 to 20 feet of snow on the experienced climbers.

McManamin, himself an experienced outdoorsman and pilot, gave his three friends – Sean Cahoon, Danielle Varney, and Ben Still — his inReach satellite communicator as they were getting out of the plane on the 13,176-foot mountain, which is the tallest peak in the Chugach Range.

“The weather was actually really nice when I dropped them off. Everything looked good. They didn’t bring any way to communicate, so I gave them my inReach and told them we could stay in touch about the weather because there is no real good way of telling what the conditions are from town,” said McManamin. “It turned out to be worth its weight in gold for sure. They are all in agreement that if they hadn’t had the inReach they wouldn’t be here anymore.”

Cahoon, Varney and Still explained that they had wanted to do a “smash and grab attempt” on the mountain by setting up basecamp on Friday, climbing all day Saturday and then coming back down for pickup on Sunday. “A lot of people have done this, and we had researched it a lot. We knew we had packed the right gear and, just in case, had a few extra days of supplies. The forecast was great for the trip, but we did know that a storm was headed in on Monday,” said Cahoon.

Saturday morning, the weather turned dramatically on the mountain with zero visibility. Mt. Marcus Baker is heavily glaciated, making for very technical travel under good conditions, so the three climbers were forced to wait it out in base camp at about 8,400 feet.

“By Saturday night we began to realize the severity of the storm, so we began rationing food. Given our experience, we were not fearful – just resolved to wait it out,” Varney said. “So we started building up our snow walls since we had nothing to do at that point.”

As the winds picked up Saturday night and the snow piled up into Sunday morning, they texted McManamin with the inReach and told him that he wouldn’t be able to pick them up as planned.

Although the trio had built snow walls around their tent to keep it from getting shredded in the high winds, by Tuesday, more than 10 feet of snow had fallen and the winds had increased to about 75 to 100 mph. In the stress of the wind and weight of the snow, the tent was destroyed and they built a snow cave out of one of the existing snow walls to survive. The trio was using the inReach several times a day to send McManamin updates as the conditions worsened.

“By Tuesday night they were very tired and not able to sleep much. It was horrendous. They had to dig out every three hours to keep from getting buried alive. Late that night the tone of their texts changed and they told me that they thought they needed a rescue and would not be able to wait it out any more,” McManamin said. “I asked them if they were serious and when it was clear they were, I told them to trigger that SOS button. We could see exactly where they were with the coordinates from the inReach.”

“We dug a cave into one of the side walls and abandoned the tent to move into the cave around 11 that night. We had a group pow-wow, feeling good about the snow cave, but not about the worsening conditions. So we did as Conor suggested and declared an SOS with the inReach,” said Cahoon.

Once the SOS was triggered, the GEOS 24/7 monitoring center contacted local search and rescue. At the same time, McManamin knew people in the Alaska Air National Guard, and began relaying messages back and forth to the trio from the rescue team.

“RCC (Guard’s Rescue Coordination Center) launched a helicopter almost immediately in the middle of the night, but the chopper turned around at 3,000 feet up the glacier because it was a total whiteout. So then it became a lot of sitting and waiting and letting them know that the rescue was underway. (The climbers) had only planned on three to five days of supplies, so they were rapidly running out,” he continued.

Wednesday morning McManamin went to the Alaska Air National Guard base for the duration of the rescue to help coordinate with the RCC. They were turning off the inReach for several hours at a time to conserve battery life. “We were surprised, but it lasted all week. When I gave it to them it was 87 percent charged and when I got it back, it was around 19 percent,” he said.

From Tuesday night to Friday morning the rescue helicopter went out every two hours, trying to determine if the conditions had changed enough to permit a rescue. When it became clear that it was going to take a while for the weather to change, the Alaska Air National Guard also made four attempts to drop in gear and supplies to the climbers from C-130 planes. Impressed with the features of the inReach McManamin was using, a member of the Guard went out and purchased more devices at their local REI store and strapped them onto each of the gear drops to monitor exactly where the cases landed. Due to the winds, they were never able to get the gear close enough to the climbers to be retrievable.

“Our cave was getting smaller and smaller, and the entrance was getting longer and longer,” said Still. “So one of us had to be continually shoveling around the clock in half hour shifts. We kept getting wetter and wetter because it would warm up to about 33 degrees inside the cave and the snow would start melting. So we had to shovel in wet jackets and get plastered in a coat of snow at the entrance due to the high winds.”

As the feet of snow piled up outside the cave, more would blow inside. “It was really scary. We would dig and it would just fall back in again. And you couldn’t venture more than a foot from the mouth of the cave because your eyelids would freeze shut and the visibility was zero anyway. We felt so desperate to maintain the small air hole and we were losing the battle, and that was the part that was so horrifying,” said Varney.

“Because our breathing hole was so far away from us, it got really hard to breathe in there as the oxygen was depleted,” Cahoon added.

Still bore the brunt of the air hole maintenance during the last two days of the ordeal, digging at first every several hours and as few as thirty minutes in the last 12 hours before rescue. “Because the air way was so far away we could not light the stove and melt snow for drinking water. We had to quit using the stove because we would get headaches from the carbon monoxide. So we collected water from the roof of the cave as best we could,” he said.

By Wednesday evening, the texts coming from the climbers had become dire when they were unable to reach the latest supply drop. McManamin and the rescuers were alarmed to get additional details from them about their lack of gear, the majority of which had been buried in the storm.

“They only had two pairs of waterproof bibs and they were sharing it as they took turns shoveling. The hours when they didn’t text me were nerve-wracking. But I kept telling them everything that was happening so they knew how hard the rescue team was trying to get there — anything to help them mentally get through it,” McManamin said.

Team decision-making and mutual encouragement kept the group going through the ordeal. “Everything just felt so desperate, no decision was taken unilaterally. Everything we did, from turning on the inReach to sharing a Gu packet, the decision was made together. We pulled together as a team and encouraged each other through it,” said Cahoon.

By Friday morning, the team knew that the window for finding the team alive was closing rapidly. When the helicopter set out that morning, the weather was still precarious but the team determined there was a small chance of success.

The pilot made an initial pass and found a place to land slightly above the basecamp. Two crewmembers skied down to the camp to check for injuries and make preparations with the trio to get them evacuated. While this process was happening, a cloud suddenly popped up on the mountain and instantly reduced the visibility, prompting the helicopter to take off momentarily and wait for a clearing again. In addition to the weather concerns, the pilot had previously dumped about a thousand pounds of fuel because he had been concerned about weight. But now, he became more worried about running out of fuel due to the unexpected weather delays. At that point, the rescue team had to make a quick decision to abandon the attempt or immediately execute it. The pilot landed again just below the camp and the team decided to proceed with the rescue.

“They had put snowshoes on us to make it easier for us to get to the helicopter. We were so psyched to get in that helicopter. We had no idea at the time how difficult the rescue had been. We thought it was routine and the conditions were so much better than they were. It’s probably a good thing we didn’t know at the time,” said Cahoon.

Several of the RCC crewmembers told McManamin that it was one of the most difficult pick-ups they had ever done. “I’ve flown a lot of people to the mountains, but it’s never ended this way. We are all tightly bonded now. The first week back, I talked to each of them everyday. If it weren’t for the remarkable technology of inReach, this story would likely have a very different ending. The ability to send and receive texts in severe conditions kept the trio in constant contact with rescuers to facilitate their safe extraction,” McManamin said. “We also threw the Guard guys a thank you party for all that they did – we all felt so close after the rescue. One of the veteran helicopter pilots said, ‘I’ve been doing this 27 years and no one has ever thrown us a thank you party’.”

Looking back on the whole rescue, the trio was so impressed with the performance and battery life of the inReach in the extreme conditions, they all went out and bought devices immediately. “Just having the ability to communicate with Conor when everything went wrong literally kept us sane. Every time we turned on the inReach and learned about all they were doing to try to help us, it kept us a heck of a lot more positive,” Varney said.

Following a brief stint in the hospital, the group was all discharged with very minor injuries, including sleep deprivation, dehydration and slight frostbite. Together, they lost almost 40 pounds in the seven-day ordeal.

“We pulled together so tightly and rationed everything. So after we were rescued, we were sitting on the floor of the helicopter, and they threw a whole bunch of bags of food to us. Candy bars, energy bars, and water bottles were just piled all around us. And even during that moment, we would open a candy bar, break it into thirds and pass it around. One of the crewmembers just laughed at us and said, ‘what are you doing? Just eat it!’” said Cahoon.