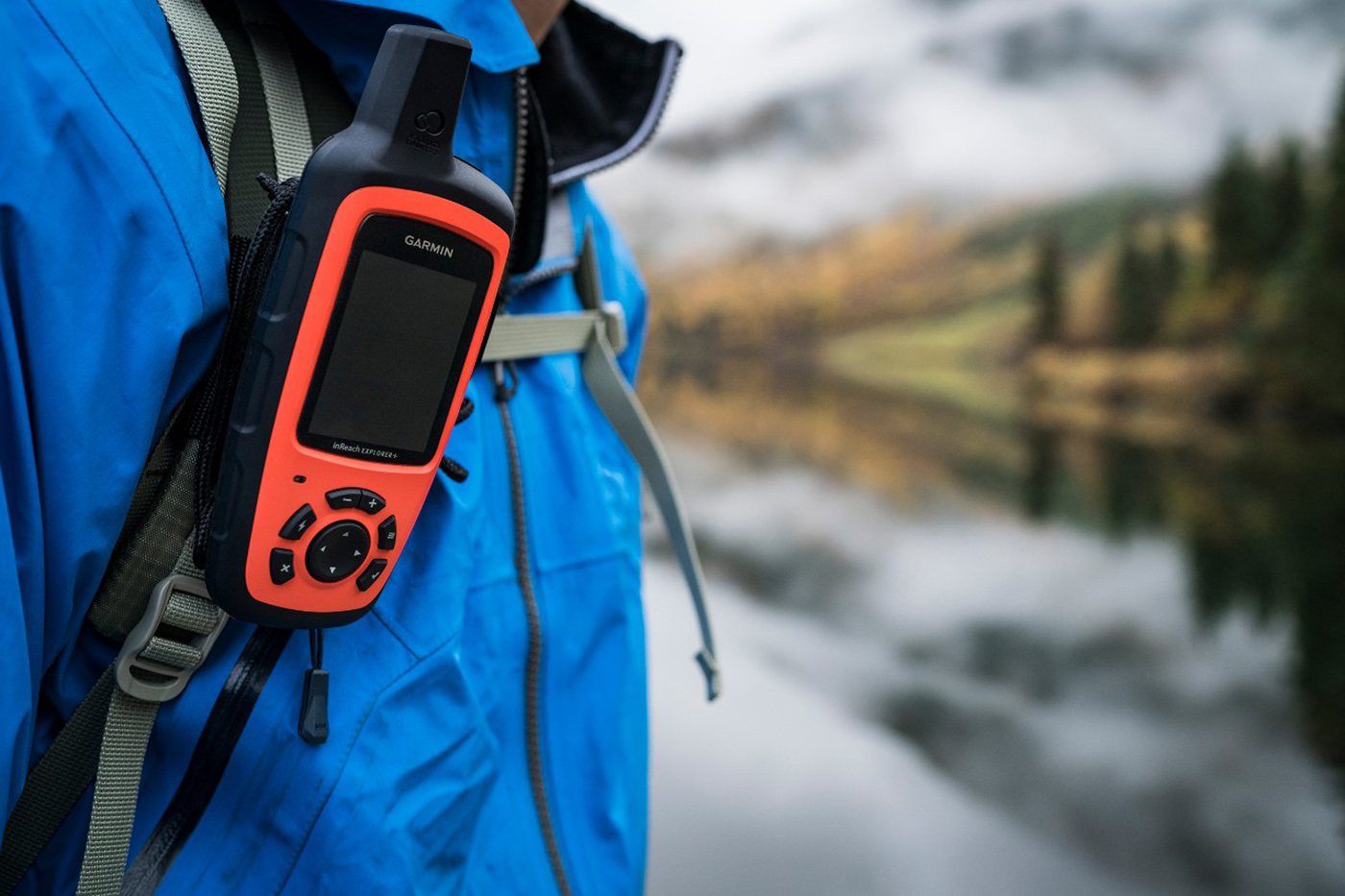 Two Sides to the Story: inReach a Lifeline for One Spouse, Peace for the Other

By: Michael R. Thompson and Julie B. Potter

Facing a potentially dangerous situation alone in the wilderness can be harrowing, but waiting at home alone for news — any news — regarding your loved one’s well-being isn’t an enviable position to be in either. Below, husband-and-wife duo Michael Thompson and Julie Potter each share their own experience with a recent hunting trip gone awry — Thompson from the perspective of a solo hunter facing imminent danger, and Potter from the perspective of a spouse waiting anxiously at home for news. For both, an inReach® satellite communication device made all the difference.

I had just notched a tag with a successful mountain hunt in Washington’s North Cascades. Clean, fresh meat was processed and loaded carefully in my pack. I stood at the bottom of a very steep canyon with the trail just over the rim above. I had been here dozens of times and knew the area well. All I had to do to reach the trail was climb straight back up the canyon wall. It would be slow going but once on the trail, it would be an easy four miles of downhill switchbacking to reach my truck.

I took a moment to message my wife with my Garmin inReach®, letting her know I was successful, and that it would be a long night of hauling meat off the mountain. Before this technology existed, there was no way to let the folks at home know that I would be late or even if I was OK. They would just have to sit at home and wonder if I was in a situation that was under my control, or if I was screaming for help at the bottom of some canyon. Although I had never used the function, the SOS feature not only gave my wife peace of mind, but it also gave me a great deal of confidence when hunting alone. I know I always have backup in case the worst happens.

It was dusk as I began my snail crawl up the side of the canyon. I could see an early October storm quickly approaching — a mix of wind, snow and rain started buffeting the canyon walls and darkness rolled in quicker than expected. My head lamp barely pierced the falling snow as I looked straight up to the rim of the canyon. I could just make out the evergreens that gave away the top. That’s when I first slipped, rocks and brush raking my chest and knees as I slowed my slide down the hill and gathered myself.

The freezing rain and snow made climbing almost impossible. For every three vertical feet I gained I would lose two. Just when I thought had made progress, I would slide on the frozen bushes, or my faulty trekking pole would collapse, and I would lose all footing and fall again.

Hours passed. My rain gear was destroyed from the many slides, I was soaking wet and hypothermia was setting in. At one point I even contemplated curling up in my tarp to take a quick nap. Nothing had ever sounded so tempting or appealing to me in my life. Just curl up and go to sleep among the boulders in the middle of a freezing rainstorm. Although hypothermia clouds your mind, I recognized these thoughts for what they were and kept moving because my life depended on it.

Eventually I made it to an outcropping of trees and had just enough energy to crawl under the boughs to get out of the freezing rain. Although utterly exhausted, I gathered tinder to make a fire. My emergency fire kit consisted of a damp lighter and some soaking wet shop towels. This was the moment where I was almost certain my life was over. I looked at my Garmin inReach and the button along the side that read “SOS.”

Perched in the same branches of the tree I was under was a large blue grouse that had finally had enough of all the commotion I was making. It clambered higher up in the branches, its wings making the unmistakable sound that only a disturbed grouse can make. In the dim light of the headlamp, I saw a feather drift down in front of me, and I suddenly remembered that I kept a small container of olive oil in my pack just in case I was lucky enough to bag a grouse for a mountain lunch.

My fingers were little more than frozen memories as I shivered uncontrollably and clumsily dug through the pack for the olive oil. I emptied the container into the soggy wet shop towels. With one completely numb hand, I rolled the lighter’s striker over the knuckles of my other hand, because all my dexterity was gone. Amazingly, the lighter produced a flame and ignited the oil-soaked rags, which was enough to get the fire going. Twigs popped and snapped as the flame grew stronger.

Soon feeling came back to my hands like a red-hot poker, and I regained enough dexterity to string up a tarp and emergency blanket for an ersatz shelter that could almost be considered cozy under different circumstances.

Now that I felt the situation was back under my control, I decided to message my wife again. I told her not to worry, but I would be spending the night on the side on the mountain. She didn’t need to know I was almost another statistic.

Dawn broke and I gathered my things. I messaged my wife again to say that everything was fine and I was going to hike out. At this point I was certain the trail was only a couple hundred feet through the trees behind me. Before I shouldered my heavy pack, I decided to have one last look at the canyon where my adventure had taken place; I thought this would be a great campfire story someday.

Cold shock washed over me as I realized I was on the completely opposite side of the canyon from where I thought I was. I could see the tree line, even bits of the trail, the icy canyon wall I had started climbing the night before. This was like waking up from a nightmare only to find yourself in another nightmare. To make matters worse, there were only rugged cliffs behind me. I would have to climb down the snow-blanketed canyon wall and start all over again. I felt like the butt of some cosmic joke.

Loaded up, I tested my footing on the icy huckleberries. I planted one of my trekking poles and realized this would be difficult but doable. I would just have to take it slower than slow. I took a second step, put my weight on it and lost all footing. I shot straight down the canyon wall, riding my meat-loaded pack like a bobsled gone wrong. I hit rocks and stumps and finally was able to turn myself over and dig my fingers into the huckleberry vines to slow down and come to a stop. I had the wind knocked out of me. Everything hurt except my fingers, which were completely numb again. The first thing I did was reach for my inReach just to make sure it was there if I needed that SOS button. I was certain I had broken bones. I patted myself all over, worked all my joints — miraculously, nothing was broken. Although I had horrific road rash, I wasn’t bleeding. Hunting gear was strewn all above me, and my trekking poles were gone. There was no climbing back up to gather it up; I was already halfway down. I carefully used a broken branch to self-arrest as I slid the rest of the way to the bottom.

I was right back where I started, except now I had no trekking poles and the path upward was covered in snow and ice. I was completely exhausted, and every inch of me felt bruised. I cut two makeshift trekking poles from some stout willow saplings and started over again. It was unimaginably slow going, but I made it to the trail without incident at 4 p.m. and to the truck just after 7 p.m. The heater brought with it feeling to my toes and hands and excruciating pain as nerve endings started communicating once again. Honestly this was the worst part of the whole ordeal. I had to pull over often just to let pain wash over me as frostbitten digits and toes came to life.

Luck was on my side for this adventure. Although at times the situation was difficult, knowing that if things got too tough (and they almost did) I had Garmin watching my back gave me a lot of inner strength to draw from.

My husband left for a mountain adventure — Garmin inReach charged and packed with him. He messaged me the first two nights, letting me know he had set up camp and telling me about the day’s activities. I replied the typical “love you — have fun.” The third day I didn’t hear from him for hours — a bit concerning at first, but I knew his outdoor skills would keep him safe. I pulled up Garmin MapShare™ — the tracking feature on my laptop — and reviewed his waypoints and path. This feature gives such peace of mind, because I could see he had moved around quite a bit during the day.

Around 7 p.m. of the day he was supposed to be home I got the message “Tagged out — home late.” I then knew of the tasks ahead of him to get his camp packed and everything packed out. I figured he would be home first thing in the morning. Then came the next message around midnight: “Storm. Camping.” This worried me. I knew he had provisions and skills, but extreme weather camping gear he did not. I again pulled up the MapShare™ site and was able to view the exact location of his last message. I knew where he was camping; it was the wrong side of the mountain. The only thing that helped me sleep that night was knowing he had the SOS feature ready to go at a moment’s notice. I replied, “I love you — be safe.” I figured if I had no response by 6 a.m. I would use the GPS coordinates of his last message and call authorities.

At 6 a.m. I pulled up his tracker and could see he was moving again — to the correct side of the valley. I didn’t get a message from him, but movement meant life. At about 7 p.m., I received the glorious “at the truck” message I had been waiting for (although his waypoints and tracking points had updated so I could monitor his location). Once he was home, I could see the depth of his experience. He was still frigid, his clothes were ripped and torn, his body was bruised and bloody. I still can’t believe he didn’t break anything. Knowing now what he went through on the mountain, I would never let anyone go without access to SOS or the ability to track their loved one. This not only saved my sanity that night but also gives me peace for future “adventures.”

NOTICE: An active satellite subscription is required to access the Iridium® satellite network for live tracking and messaging, including SOS capabilities. Some jurisdictions regulate or prohibit the use of satellite communications devices. It is the responsibility of the user to know and follow all applicable laws in the jurisdictions where the device is intended to be used.