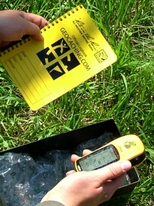 Geocaching has been described as a worldwide phenomenon, an online scavenger hunt and the perfect family activity. Now it’s being called the key to a recent rescue in a search for stranded climbers on Mount Hood in Oregon. The hikers, equipped with a cell phone, were able to make contact with authorities after spending a night in a snow cave, according to news reports. But the two men were disoriented and had no way of describing their location. Until they stumbled across a geocache. Because the location of the cache was known, searchers were able to zero in on the climbers’ location and guide them to rescue just 13 hours after they first learned the men were missing.