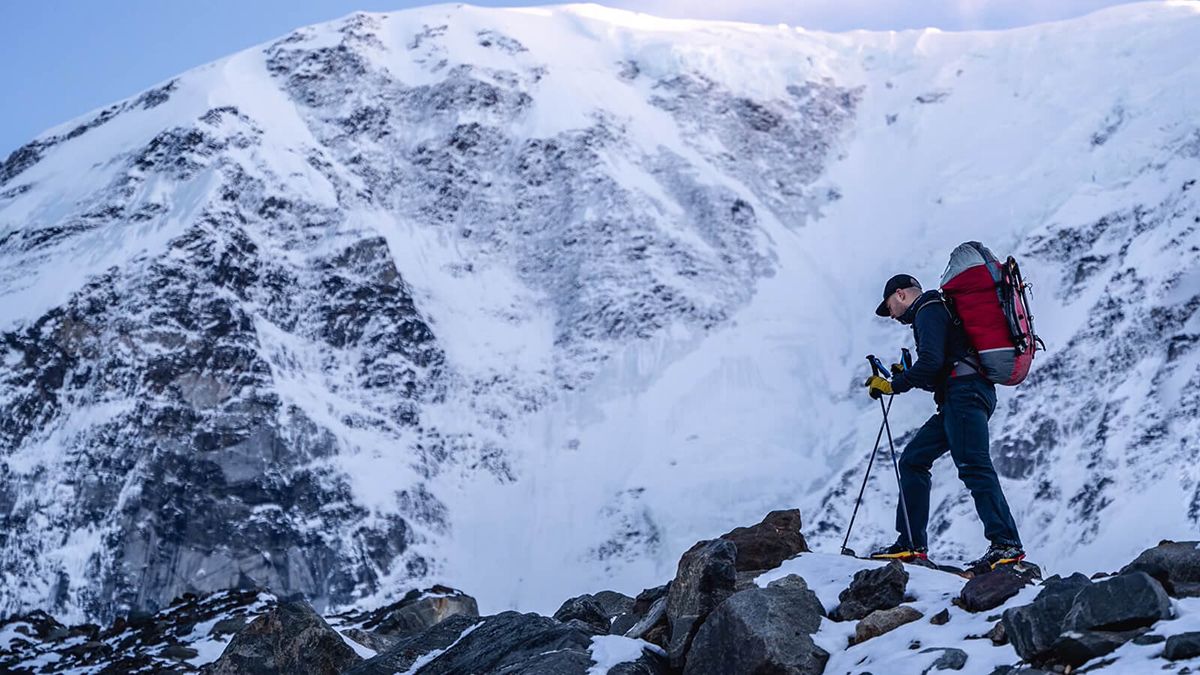 Forecasting in Remote Alaska with the Garmin GPSMAP 66i

Benjamin Lieber is a professional climber whose primary focus is on expedition alpinism in the greater ranges. For most of the year, he resides in Alaska, where he climbs, writes, and advocates for the protection and preservation of land. Below, Lieber writes about his recent experience with a Garmin GPSMAP 66i in the Hayes Range of Alaska.

It was the middle of the night, and I tossed and turned in tangled blankets while anxiously awaiting the morning. Alex Hansen, Cameron Hygate and I were tucked into The Lodge at Black Rapids, our bags packed and ready for transport from the old roadhouse at the bottom of the hill. At first light it would be time to head into the big mountains of the Hayes Range.

The sun was out come morning and I hopped into Jesse Cummings’ two-seater Super Cub for the hour’s ride to basecamp. Joy, fear, nerves, gratitude, happiness — I felt them all on the flight in. When we landed, it was just Jesse and me standing below a massive unclimbed mountain face of more than 6,000’. We were a pilot and a climber alone in an untamable land. Over the last year, we’d become partners as Jesse’s skilled flying and confidence-inspiring camaraderie made several alpine climbing trips possible here. Then the plane left, and it was just me for the next hour-and-a-half until Cameron arrived. I gazed out at the walls, at the snow and the ice. I looked up at pointed summits, prominent snow flutings and hanging glaciers. This was a place rarely visited and to be here alone on the sun-blanketed snow was the dream of Alaska. I set up my chair and let the silence of the mountains prevail.

Over the next few weeks, we’d live under the watchful eye of these mountains as we tried several new routes, and our companionship was the heart of our solitude. At times the northern lights would bloom overhead in greens and pinks, waving to us and glistening in our eyes. Other times we were technicians rappelling through the darkness, the evening wind brushing sunburned noses as we pounded iron by headlamp and hammer. During daylight hours, we could be seen as three tiny dots plucking our way up new terrain or resting tired bones and aching feet in basecamp.

This range is less traveled than its equally remote neighbor, Denali National Park. In both places, along with other great ranges of Alaska, climbers and skiers agree to be self-sufficient in their travels. This comes with many things to consider as Alaskan peaks are cold, snowy, windy and continually endure changing weather systems. Most often expeditions are launched at the hands of storied Alaskan pilots in their wilderness-ready aircrafts. Any attempt to “hike out” to the road from a major mountain in this fabled land is a serious undertaking. Climbing high here is a commitment and many things must go one’s way to stand on one of the mystical summits that tower above the valleys. Their sharp corniced ridges, with snow plumes casting into the sky, have beckoned climbers for more than a 100 years.

Of the highest importance is understanding the weather. While paying close attention to the sky can be the difference between suffering and smiling, the mountains commonly block our views of the distant but surely incoming weather. For many years I have relied on Garmin inReach® devices and services to communicate with experienced local climbers to receive detailed forecasting via the two-way messaging capabilities1. Aside from forecasting, an inReach device provides SOS support should we need it and the ability to stay in touch with family and friends to let them know how we are doing. Most often I find myself texting our bush pilot to give him updates on our whereabouts and well-being. This spring I brought a Garmin GPSMAP® 66i for the first time.

The GPSMAP 66i is a fully loaded GPS device built for the wilderness and was immediately welcomed into my backpack. Replacing my trusty inReach Explorer®+, I was curious as to what might end up being the major advantages. Being particular about the weather, I began to obtain the Premium Forecasts once a day and cross-check them with the forecasts I was receiving in messages. On the 66i and partnering Garmin Explore™ app, premium forecasting is detailed to the hour and particularly accurate. As the days went by, confidence in the weather service grew, and I stopped messaging our weatherman for forecasts and relied on the 66i forecasting exclusively. It did not disappoint, and our team continually cross-referenced the forecast to the current weather we were seeing in real time.

Notably, our weatherman sent a detailed forecast that called for extremely light winds and unwavering clear skies. The 66i called for the same, but with a few hours of clouds brushing through escorted by high winds and warmer air. Sure enough, as the time came near, clouds began to crest a ridge beyond camp and heavy winds shook the tent. Snow and ice crystals, freed from slopes and basins by the wind, battered the tent from the south, and we all slipped into our work gloves to hunker the tent down. Just as it came, it went, and calm, cool air overtook basecamp before nightfall. We could not have been more impressed by the accuracy.

Having access to reliable forecasts in such a remote mountainous environment is a leg up in safety compared to previous generations of expeditions. History shows that lack of foresight about the weather has yielded much hardship in Alaska, and it will continue to do so for any parties unable to attain such information. Our team felt stronger with the comfort of dialed forecasting coming in through the GPSMAP 66i, and I expect to continue to benefit from it on future expeditions.