There are special people that look for something positive in each day, even if some days they have to look harder than most. Jessie Morris, one of our newest outdoor ambassadors, lives by this motto. She’s a travel addict, Pacific Northwest adventurer, snowboarder, and photographer. When she’s not out exploring, she spreads her love and passion for the outdoors, and does so with the help of social media. Here is Jessie in her own words describing her latest trip to the infamous Faroe Islands between Iceland and Norway.

“A long time ago, I had seen a picture of a cliff-side lighthouse that seemed very far from real. It always stuck with me as an inspiration to discover magical, untouched places in nature and was distinctly part of the inspiration to visit the relatively hidden Faroe Islands. It was the driving force for this journey out to one of the northern most points on the islands where sheep out-number humans by a 2,000:1 ratio.

To get there, we crossed several islands via highway tunnels, took a boat to the island, then squeaked through 4 single-lane tunnels threading the dramatic peaks of this 6km-long island like a needle through a haystack until we reached the very last town inhabited by about 20 people. We then wandered up the side of a mountain, with little direction or trail aside from a web of sheep paths strewn about, and a general “that way” direction, with this exact view in mind.

While in a foreign country where GPS and topo routes aren’t as documented, having my Garmin fēnix 3 watch with me was super helpful and comforting in that I could monitor our GPS track on the map. Several times we referenced the GPS track to ensure we were headed the right way, up and over the mountain ridge into the unknown. 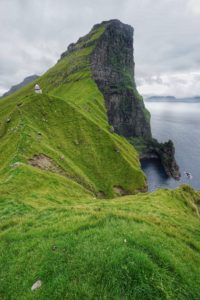 After reaching the lighthouse and a gut wrenching tight rope walk past a ridgeline with several hundred feet of cliffs on either side, this view that I had seen in photos ‪before sat before me and took my breath away. It was an incredible reminder of so many things…. That if you dream and work hard/smart enough and long enough, anything can become a reality. That not every journey has a clear path you can follow – sometimes you have to lead your own way up a blind mountain not fully knowing what to expect on the other side. And finally, that it’s so important to preserve not only these treasures but our everyday surroundings – these things have been around longer than I can comprehend and what greater gift could we leave for our future generations?”

Jessie’s passion for the outdoors is an inspiration to many and we are so proud to call her an ambassador. Join the adventure and follow Jessie’s travels here and don’t forget to share with us on Facebook, Twitter, Instagram and use #HaveNoLimits.