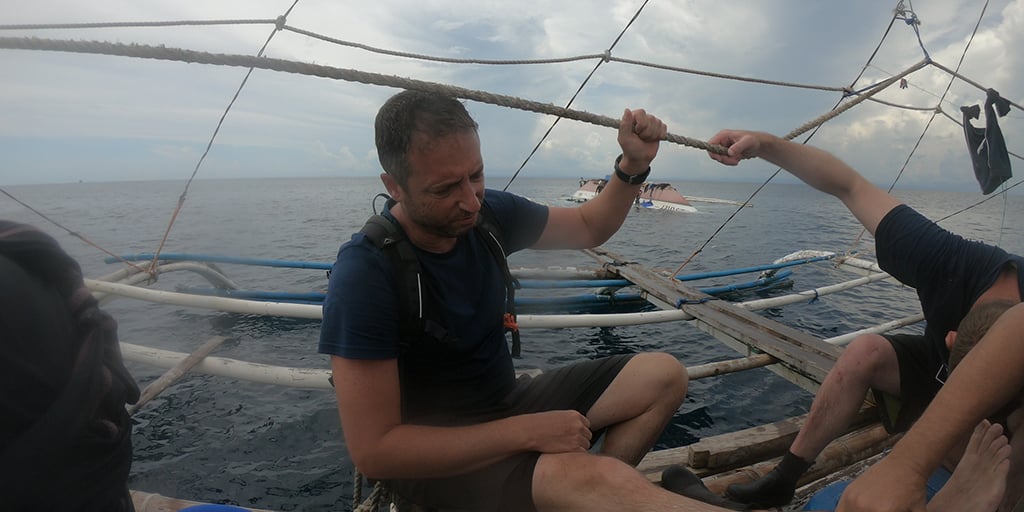 As a triathlete and master scuba diver trainer, Amanda Schaefer is no stranger to Garmin. A few years ago while training for a half marathon and completing her dive master certification, she purchased the Descent™ Mk1 dive smartwatch and has been wearing it ever since. “I wanted to have one device so I didn’t have to switch watches from running or biking to diving,” Amanda said.

It’s a decision that has paid off in more ways than one. While vacationing in the Philippines on the small island of Malapascua, Amanda, her husband Collin and some of their friends planned a dive excursion and set off for a very unforgettable day.

It was early in the morning on a beautiful day with rainbows over the islands when Amanda’s group boarded a vessel headed for a 2- to 3-hour ride to the remote island Capitancillo. As the boat trekked along, Amanda noticed a storm wall forming in the distance.

“It was far enough away that there wasn’t a cause for concern, so we continued forward. In a short while, it became evident that it may be time to reconsider and turn back,” she recalled. “The rain started quickly, and the captain began to slow the engines with the intention of going back the way we came, but it was too late.”

As the captain quieted the engine, a huge wind – seemingly from nowhere – grabbed the boat, catching the deck covering like a sail and causing the very large vessel to capsize within seconds. As the boat keeled, everyone scrambled. Those who could jump did, but some remained trapped in the hull while others were literally thrown into the sea. One of those people was Collin.

“When Collin was thrown in, it was with enough force and depth to activate the dive mode on his Descent Mk1,” Amanda explained. “Moments later, he surfaced and triggered the Descent Mk1 watch to mark his GPS location, which he routinely did for all of his dives.”

After counting all those present, passengers on board began self-rescue efforts. After multiple dives into the sunken portion of the hull, they were able to recover a few phones in dry bags and began calling for help. They had been drifting for nearly an hour with no radio or beacon, which under most circumstances would have made it hard for rescuers to find the capsized boat. But thanks to the Descent Mk1 auto-logging the entry point, Collin was able to give the rescue team the GPS location of the crash site as well as the current location – both standard functions of the Descent.

“The rescue team was then able to track the drift in order to direct the search efforts,” Amanda said. “After three and a half hours, a drift search team arrived and was able to locate us. Without our Descent Mk1 watch, this may have been a story we didn’t live to tell.”

For more information on the Descent Mk1 dive computer, please visit garmin.com/dive and for more stories like this, visit the Saved by Garmin tab.