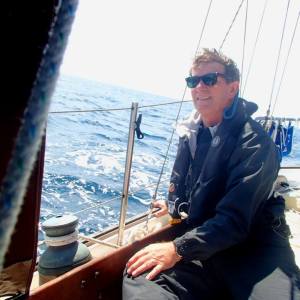 Michael Hurley departed South Carolina in his 30-foot sailboat for a 3,400-mile solo journey to Ireland. After just 1,200 miles, the experienced sailor found himself in a life-threatening situation as his sailboat started taking on water. Hurley brought an inReach to communicate with his family and friends, and post to Facebook throughout the journey, but the device played a major role in coordinating a rescue when the conditions were too rough to continue.

Hurley’s journey began on May 25, 2015 when he left Charleston, South Carolina for Ireland. The goal for his daring adventure was to find inspiration for his upcoming novel “The Passage,” a story about a man who discovers a stowaway on his boat while sailing from Charleston to Ireland.

After two weeks of near-ideal weather, Hurley sailed northeast along his planned route towards Newfoundland. It was along this route, a few hundred miles off the coast of the eastern United States, that Hurley ran into his first major obstacles of the journey – two back-to-back storms that relentlessly battered the novelist’s beloved ketch.

The first of the storms brought a potential problem to Hurley’s attention. A leak had developed where the hull and deck joined together, allowing water to enter into the boat. At first, the leak was not a major issue – Hurley had a bilge pump powered by one of his two on-board batteries that could keep up with the water, and a solar panel to keep the battery charged. It wasn’t until the battery died from a lack of sun that Hurley began to worry.

“At that point I was pumping the water out by hand, and I just couldn’t keep up,” said Hurley. “I had been using my inReach to post updates to Facebook and send messages back to shore, but by then I also needed it as a way to receive weather updates. I just wasn’t sure how long my boat would last in those conditions.”

A Facebook post stating that his boat had started taking on water was enough to cause great concern among Hurley’s following on Facebook. A member of the US Coast Guard in Boston saw his post and emailed Hurley to see if he was in need of assistance.

“I couldn’t believe that they had reached out to me, instead of the other way around,” said Hurley. “I was tired, but I didn’t think I needed to be rescued at that point. So I continued pumping and hoped that the weather would change.”

The weather did change, but unfortunately not for the better. Hurley was caught with too much sail out when the winds began to pick up, causing the boat to be tossed back-and-forth in the high seas. Water began entering the boat at an alarming rate, and Hurley began to lose confidence in his ability to finish the journey.

On June 10, just 16 days and 1,200 miles into his adventure, Hurley sent out a distress text to the U.S. Coast Guard in Boston through his inReach. The Coast Guard relayed the message to all vessels in the area, and the State of Maine, a Maine Maritime Academy training vessel, received the distress signal. All messages sent through the inReach contain information about the user’s location, including their exact coordinates and bearing. The State of Maine was only about 29 miles away from Hurley when the alert was received, and immediately began their response procedure.

According to Hurley, the State of Maine reached him and his battered ketch, The Prodigal, between one and two hours after the signal was sent out. While the training vessel had previously responded to similar emergencies, this marked the first time a rescue was conducted by the Academy’s students.

While Hurley never used the SOS button to summon a rescue, he noted that the device played a critical role in keeping him safe when the situation turned dangerous.

“It really makes you feel connected and confident when you are off the grid. The same device that enabled me to text back and forth with my friends and post to Facebook also coordinated the rescue when I needed help,” said Hurley. “I’ll certainly be taking one with me whenever I go off the grid.”

Hurley plans to travel to Ireland this summer, this time by airplane, to continue his adventure while finishing “The Passage.”