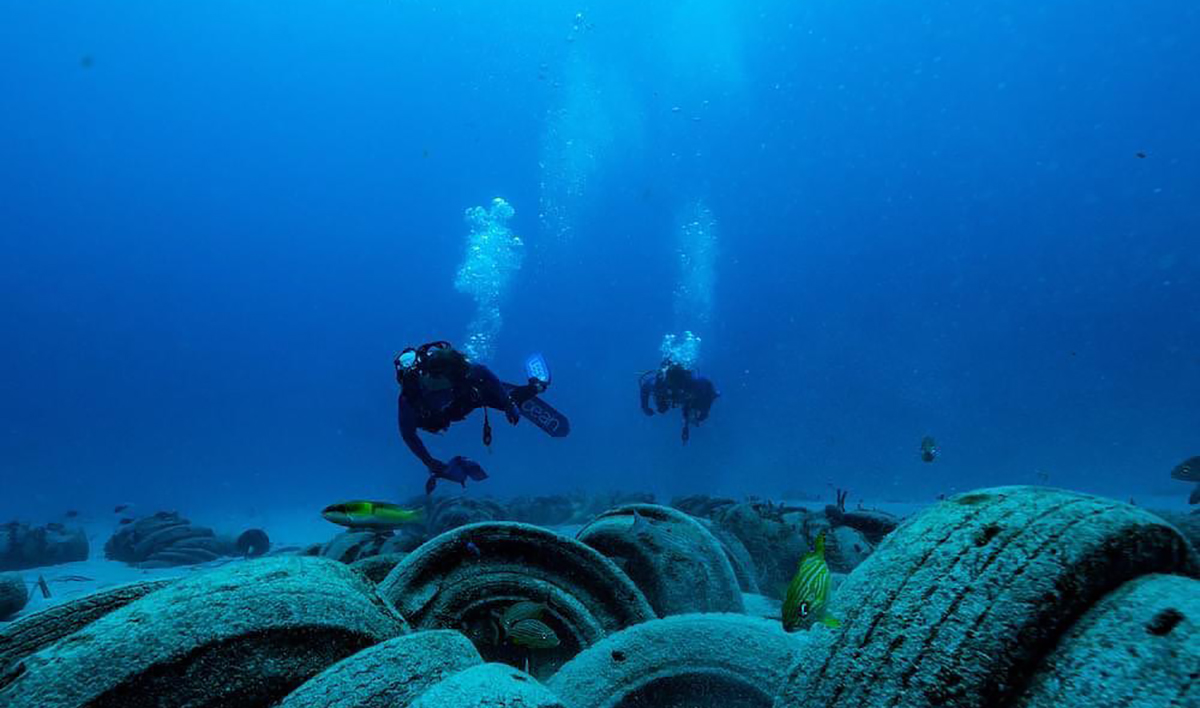 In fall 2022, 4ocean, a conservation group headquartered in Florida, set a world record by cleaning 25 million pounds of trash out of the ocean within five years. By their last count, they currently sit at 27,340,278 pounds of trash pulled — and they use Garmin technology to help.

Founded by two surfers, Alex Schulzeand Andrew Cooperoriginally came up with the idea of 4ocean in 2015 after a post-graduation surf trip to Bali, Indonesia.

“The beaches they were trying to surf on were riddled in plastic — plastic coming up in each wave, plastic on the beaches,” says 4ocean Brand Marketing Manager Kaycee Guffey. “Fishermen were explaining to them that the community was having trouble catching fish — so much trash was driving away the ecosystem.”

Freshly graduated from Florida Atlantic University with business degrees, Schulze and Cooper devised a business model centered around selling bracelets, the purpose of which were twofold. On the one hand, the jewelry served as a physical reminder to the wearer (and hopefully a conversation starter with their friends) to keep the health of the world’s oceans in mind when consuming single-use plastics. Made from the plastic collected on cleanups, ideally, it’d be hard to drink from a plastic water bottle with that reminder on your wrist. On the other, the funds raised from the sale of the bracelets were used to pay former fishermen whose jobs had been rendered obsolete as plastic replaced the fish in their area. Rather than fishing for fish, instead they’d fish for the plastic that’s slowly clogging up the world’s rivers, oceans and coastlines.

The operation has since morphed into one of the world’s largest ongoing ocean cleanup crews, and bracelets have been spotted on celebrities like Tom Brady, Ellie Goulding, Macie Williams, Whoopie Goldberg, Hilary Burton, Jayden Smith and more. (And it’s worth noting here, Guffey says, that 4ocean didn’t send those bracelets — Hollywood has taken to them on their own.)

For the first two years, it was the sale of only one product, the original bracelet — every sale of which funded the removal of a pound of trash from the ocean, as well as funded the equipment, crew members’ salaries and more. But since then, product options have grown to include items such as reusable cups, bottles and shopping bags as well as beach chairs, apparel travel straws and more. Interested parties can even purchase pounds of ocean cleanup services in increments starting at 1 pound for $10 up to 25 pounds for $250.

4ocean crews use Garmin marine technology to help them in their trash removal efforts. “They’re very important pieces for our operation,” Guffey says, citing the usefulness of Descent™ MK2i dive computers, which help divers to go down and retrieve trash below the ocean’s surface, as well as ECHOMAP™ Ultra chartplotters for mapping and GT56 transducers for using scanning sonar to see everything below and around the boats.

What is 4ocean’s next goal? “To amp people up for 50 million pounds,” Guffey says. To support 4ocean’s cleanup efforts, view their website here. To shop Garmin products that might help you go out on the water and remove some trash of your own, click here.