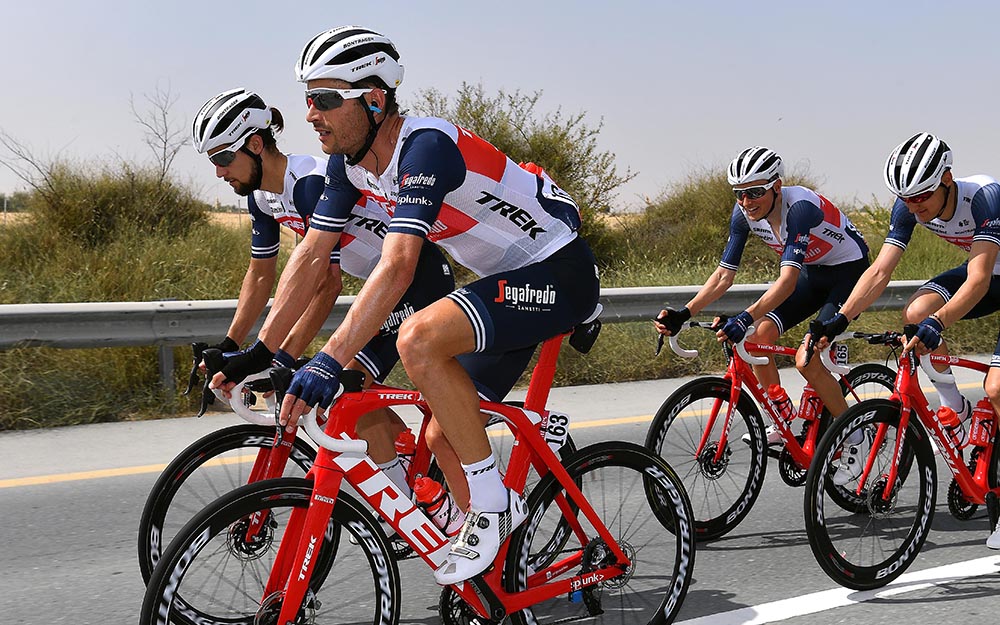 The Mental Challenges of Restarting the Pro Cycling Season

The Trek-Segafredo pro cycling team had a flying start at the beginning of this season until it all came to a halt due to coronavirus. With all the races dropped from the calendar and the uncertain times that followed, the mental challenge to keep the spirit alive was tough for both staff and riders. We spoke to Josu Larrazabal, head of performance for the team, on how difficult it was to keep the morale high during lockdown and what kind of new challenges lie in wait for the riders in the upcoming second part of the season.

A flying start
Larrazabal has worked for the team since 2013 and takes care of all the multidisciplinary work for the staff and riders. In addition to a group of seven riders he coaches directly (both men and women), the Spaniard also coordinates and leads a group of coaches, doctors and the nutritionist.

Last season the team scored some good results with a victory in the Giro d’Italia and with Bauke Mollema winning Il Lombardia, one of the five Monuments of cycling. Add in Mads Pedersen winning the World Championships, the team has the coveted rainbow jersey in its armada as well.

This year the team put in a great effort during the winter to keep their momentum going and succeeded, achieving a double victory in the Tour Down Under with Richie Porte and Ruth Winder, Jasper Stuyven winning the opening of the Classics campaign in De Omloop and a fourth place overall in Paris–Nice by none other than Vincenzo Nibali.

The Italian star joined Trek-Segafredo this year and has a huge impact on the team, according to Larrazabal. “Putting him together with Porte and Mollema means you can cover every single stage race of one week or even a Grand Tour with certain guarantees of a good result.” The ‘Shark of Messina’ has a rich palmares, including winning the Tour de France and the Giro d’Italia (twice!) and is considered as one of the biggest fish in the peloton.

The challenges during the lockdown
There seemed no cloud in the sky until more and more races were being canceled and then the whole season stopped. “Looking back at it, it was a complete mental challenge. We have 40 riders to manage, so we had all kind of reactions and ways to react on it. They are all passionate about riding their bike, but they are completely driven by the goals and the competitive feeling. They need that adrenaline. When you take the races from the calendar, this all falls away. We knew that but were surprised how much this affected some of the riders.”

The team monitored the training load during the lockdown. Larrazabal said there were three clearly defined periods in the results. In the first month, it was still OK, and most of the riders kept to their routine. In that month, the hope was that everyone could go back to racing again relatively quickly. The second month was the hardest because that was the most uncertain period. They realized it would take a long time as more and more races were canceled or postponed, even the Tour the France.

That period was the hardest mentally, and the riders all struggled with that in different ways. The team decided to give them some breaks to cope with that. In the third period, the new calendar was formed, and that was big change for the riders. “The relief for the riders was incredible,” Larrazabal said. “In the first week of that third period, many of them had a huge training load. Even the riders who were still only allowed to ride indoors. We really had to calm them down. Once everyone was allowed to ride outdoors again, we did a big block of endurance without the focus on intensity. They needed to enjoy the freedom again, but this time with a clear goal and that was making the difference.”

The learnings
Once again, the team realized that the mental side always comes first. “The learning is that in situations where the mental side is the challenge, you have to respect that and don’t have to be stressed about the training side. I think we did it very well, and we really focused on that. We never pushed them, not even those who were struggling a lot and were not training that much. I’m happy with how the coaches and sporting directors approached the problem, and I think we did a good job.”

Besides, the lockdown was not all doom and gloom. The staff and riders are normally always on the road and have little time for friends and family. “We saw ourselves in a completely new situation and were more focused on our own personal life. You know, from time to time life gives you examples how to take care of the little things again.”

Final preparations
In July the team had several training camps, mostly based on altitude to prepare for the mountain stages in the Grand Tours. “It was very special for everyone to see each other in real life again. The focus on the training camps was to let them know how important it is to keep the same level and approach as we did in the beginning of this season. They all are ready mentally and physically. The motivation is now super high, and we need even more than ever to be back at the races!”

Larrazabal emphasizes that the right gear also helps them for a strong comeback. The Garmin Edge® with the ClimbPro feature is a good example of that. “This feature makes a difference in the races, and our riders use and like it a lot. In hilly races there are many climbs, but as a sport director you cannot define all of them. It would also be too much information to tell them about every small climb on the radio. So we now load the GPX files in the Garmin head units, and they can see that info prompting automatically. They almost all use it and always give us good feedback about it.”

Same races, new ingredients
It’s almost time for the restart of the season, which begins with some big Italian classics, and the team is very excited to race again. Larrazabal is on his guard though about the new challenges the riders will have to face and breaks them down one by one:

Dense calendar
First, we have a very hectic calendar with many races in a very short period of time. “The big goals are closer from the start this time. You have to be there from the first race. Normally you have a few months to get in shape for a Grand Tour, but now we start in early August and then the Tour de France in within 25 days. That will have an impact, and I expect a really high level from the first race.”

Weather conditions
Then there is a big shift on the calendar with races being held under other weather conditions. “The biggest differences will be for the Tour de France and La Vuelta. The heat is not the same in France in July compared to September. Riders who normally struggle with the heat will have a better chance to perform well in the Tour this time. For the Vuelta, the weather will be completely different. In the middle of August, the temperature could rise to over 100 degrees but now in October and even the final stages in November, I don’t think the heat will be a problem anymore. For the Giro and the cobbled Classics, I expect it to be quite similar because the European weather can be as erratic in spring as in autumn.”

The mental challenge
With such a short season, there is hardly any time to recover mentally after a setback. “There is no doubt with the mental need of racing, they want to test themselves and see where they are right from the start. Then it’s a matter of managing the form in the best way over the short season. From a physical point of view, we can keep the high level in the coming three months of racing. But the challenge will be the mental side, and this has a huge impact on your shape. Simply put, shape is 50% about your physical condition and 50% about your mental condition. So if the mental side is not there after a crash or huge disappointment, then that is something hard to handle in this short season. The next race is already coming up in no time.”

A biological challenge
Then there is something you might not have been thinking about: the influence of the time of the year. “Generally, there are riders who have performed always very well in the last part of the season. This has to do with biological rhythms and mental approach. This year we’re almost moving back to winter at the end of the season when the Vuelta finishes on Nov. 8. After so many years with our time references, this can be difficult for some. October is normally the moment for the break, November is the start of the new training period and December is the month of the first training camps with the teams. This is completely integrated in our biological clock. I think this will have an impact.”

More aggressive races
And finally, there are many teams having financial problems because of coronavirus and a lot of riders don’t have a contract for next year because of this. They want to prove themselves to secure a contract and might be more aggressive in the races. “No doubt, that will be a big one and will have a huge impact. Happily, that’s not the case at Trek-Segafredo and we must be very thankful to them. The message from the team during the lockdown was from the beginning strong and solid. This can make the difference in the second part of the season, for both the riders and from the staff. We have something to give back to Trek and we cannot forget that.”

Looking at the goals the team has set for the remaining season, Trek will be more than happy when these can be fulfilled. “Our goals are winning one of the big classics in the cobbles campaign with Stuyven and Pedersen. Furthermore, winning a stage in every Grand Tour, a top-five finish in the Tour de France with either Mollema or Porte and obviously winning the Giro d’Italia. With Nibali we have a rider who can win it, so that’s our target!”