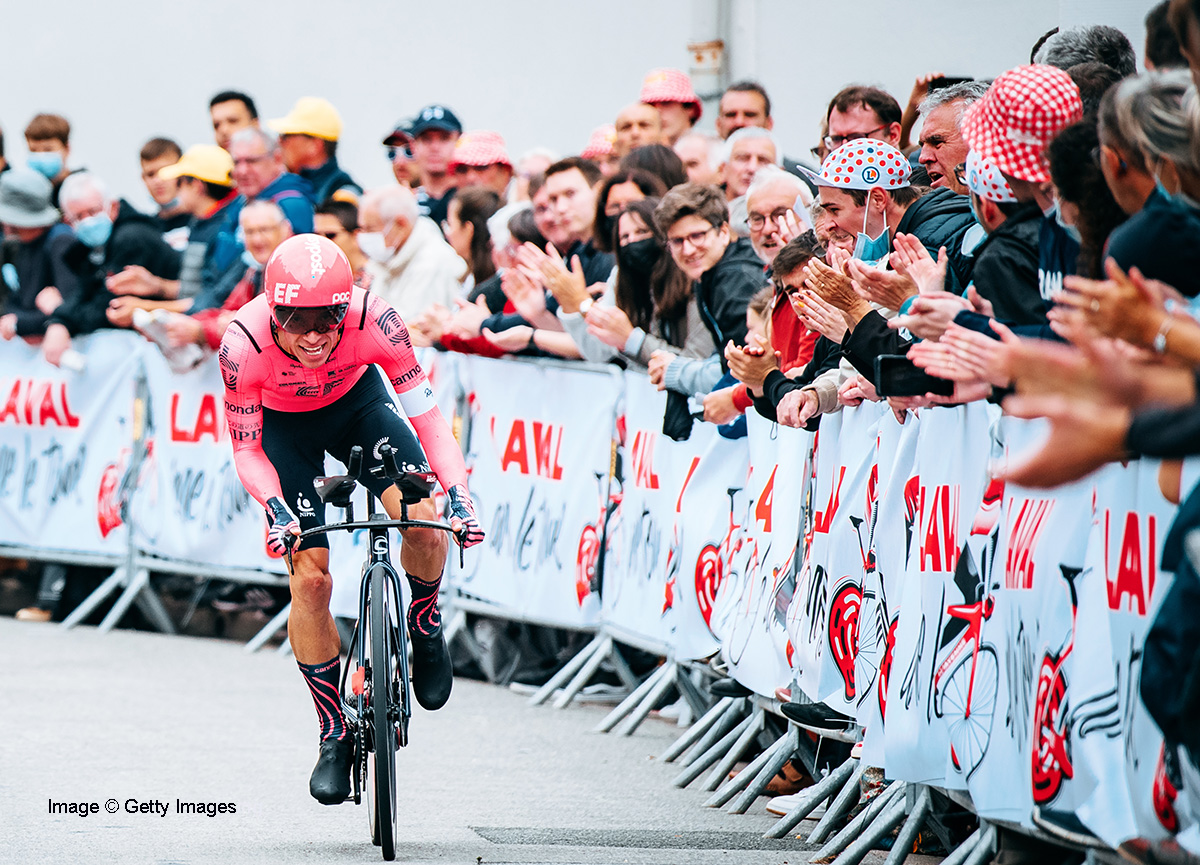 A Day at the Time Trial During the Tour de France

Grand Tours consist of multiple disciplines where General Classification (GC) contenders can rely on the help of their teammates — except for the time trials. In this individual short race, it’s every man for himself. Here you can make up or lose a lot of time. One little mistake or bad form can ruin a good spot in the GC rankings, as we saw last year in the decisive time trial in the Tour de France. Will it happen again this year? Rigoberto Urán of EF Pro Cycling knows all about it and talks us through a typical day at the office during a time trial.

Urán is one of the top contenders when it comes to a high GC ranking in the Tour de France. He became second overall in 2017, seventh in 2019 and eighth in 2020. “For me, the Tour is special and the most important race in the world with the best riders. It is very hard, and I always do my best to finish as high as possible. But there are many factors that come into play: your health, a good condition for the 21 stages, staying out of accidents, crashes, mechanical failures and so on. But I must admit: Once you’ve been on that final podium in Paris like I did four years ago, you want to achieve that again!”

While the Colombian star is known for his great climbing skills, he’s a fast time trialist as well. Urán especially likes the time trial (TT) in the Grand Tours, and we can see this in his results. In almost every TT in the Tour de France, he finished within the top 10. “I just love the time trials! I’m not a Cancellara, but I’m not bad for a climber,” he laughs. Urán trains about two times per week on his TT bike throughout the year but explains why you won’t find him in front of the results after the prologue or at a stand-alone time trial. “That’s totally different because then everybody is fresh at the start, or they have only prepared for this discipline. Look, I’m not a TT specialist, but in a Tour de France after 19 stages and climbing the mountains, your legs feel different, and you need more power. There lies my strength. I’ve got the good equipment for this year’s TT in the Tour, the bike is working well, and I trained for the TT. We’ll see,” said Urán, who surprised everyone at the Tour de Suisse by winning the time trial stage.

Because a time trial starts later during the day than a normal stage in a Grand Tour, the riders have time for an extra training in the morning. This is when they check all the details of the course again with the team: the corners, where the wind is coming from, what kind of gear ratio they will use, etc. Sometimes they do a course recon a few months before the race, but the extra recon on the day itself is vital. “That’s very important, because then the course is closed and looks totally different. There is no traffic, and you have to cut the corners in a different angle because of the fences they’ve placed on the track.”

Nutrition is just as important during a TT as in a normal stage but for the chefs, it’s a day of hard work. Because every rider has a different start time, they can’t have breakfast together, and they all eat at a different time. Even though a TT race is much shorter than a normal stage in a Grand Tour, Urán eats the same. “Normally for a stage in the Tour, I eat 3 hours before the start. I eat an omelet with three or four eggs and cheese, some rice, bread, and drink coffee. And I don’t like to change my menu, so for a TT I also eat the same meal 3 hours before the race. If I start at 5 p.m., I have an early breakfast and then at 2 p.m. I eat my omelet, rice, etc.” Besides the chefs, the rest of the team, like the mechanics, also works all day long because of the individual start times. “It’s just a 1-hour race, but you need 10 hours to prepare everything.”

Warming up on the Tacx® trainer

When the hotel is close to the track, Urán normally leaves the hotel 2 to 3 hours before the start. One hour before his TT race, he starts warming up on the Tacx NEO 2T trainer. Those of you following Urán on social media must have seen that he loves to train on the Tacx trainer. Take, for example, last year when he was injured after a crash and during the lockdown when it was not possible to train outdoors. “I rode every day in the virtual worlds of Zwift. I really like it and use the Tacx often. Besides, you can optimize your pedal stroke on a TT bike with a Tacx trainer and test your perfect position. Only on a Tacx can you ride for 40 minutes without braking for traffic or corners and fully focus on these things.”

Before Urán starts the warming up, he makes sure everything is ready for the race: The radio is attached to his body, the communication is plugged into his ears, he’s got his TT suit on, the shoes, the gloves — everything. Only the helmet needs to be put on before the race. Some riders prefer to do the warming up on the road bike, but the Colombian uses his TT bike all day long. Then it’s time to run the warm-up protocol on his Garmin Edge®: “My coach sends the instruction for this. For a normal TT of 30K, for example, I start 10 minutes in power zone 2 and then for 2 minutes I go up 1 zone every 30 seconds before I do the same the other way around for 2 minutes until zone 1. I repeat this 4 times. Then I relax for 3 or 4 minutes before I do a full gas sprint for 10 seconds on the pedals to activate the body. This takes about 35 to 40 minutes. This protocol can be different per rider and also per race. Is it at the start of a Grand Tour or after 19 stages? Is it a super-hot day and will this cost a lot of energy? So sometimes 20 minutes is enough, and sometimes you need 40 minutes.”

To get in the right zone, Urán secludes himself as much as possible. “Some riders watch the TV to see the other riders during the TT, but not me. It’s just too much information. If you see another rider crash, it can get you out of your focus. I just watch my power data on the Garmin Edge and listen to music. Colombian music — reggaeton! This is good for my motivation.”

Fans are always gathering around the team busses to see a glimpse of the pro riders who are warming up, but this doesn’t distract him at all. “Sometimes you don’t even see the people. You are focused and listen to your music. Even when your family is there, you don’t see them because you are in the zone. Sorry, but I am working, man!” After warming up, Urán goes to the team bus, does an important final toilet visit and about 10 minutes before his race, he goes to the start. “I want to check my TT bike early. Maybe you have to change something, like lower the saddle with 1 or 2 millimeters.”

The moment is there, and the race is about to start. Some riders want to use the final minutes before the start to peddle the legs again on the Tacx; other riders just sit and wait. The tension is rising, and the stress levels are up, especially for a GC rider like him. It is a very important moment: They can win or lose a lot of precious time in the overall ranking. You can imagine that the mental pressure is enormous when they take off.

“Yeah, it’s super hard. You get the information during the race from your team, like you’ve lost or won time compared to your competitors. But I don’t like that; I want to focus on the race and just want to ride full gas. So during the race, I only want to see my power on my Garmin Edge® 130. No heart rate, speed, cadence, altitude and so on. I start full gas in the first 3 minutes to get up to speed and then for 20 minutes I’m maintaining the power, but this obviously depends on the course.”

“Besides the power, I only focus on the instructions from my team that is following me on the course. They have more visibility in the car than I have with my aero helmet, especially when I go full gas on a straight. My head is down at that moment for the best aerodynamics. I sometimes don’t see the road for 5K and then the team will instruct me to go more left or right to keep me straight on the road. My legs are going bam, bam, bam, and I only see my power: 400, 420, 380, for example. And sometimes, you don’t remember the corners that are coming up, but my team has all the information. So, I arrive at a corner with 60 kph and the teams says: ‘You don’t have to break, you go full gas in aero position.’ You then just have to trust them.”

He closes his eyes, puts his hands on the imaginary TT handlebars in front of him and for a moment, he’s back on the TT course. Like a tunnel-visioned bobsleigh rider, he moves from corner to corner. “The next corner is dangerous, be careful of the small bump in the middle, so it’s better to stay left, but you need to brake,” he continues with the imaginary team instructions. He opens his eyes again and says: “It’s almost like rally racing where the driver fully relies on the navigator and needs to follow the instructions. If they say it’s full gas, but there’s a corner, I will crash. They must know every detail on the course; this is very important.”

Keeping focus is key during a TT: “I almost crashed one time during a TT, even though the team warned me for a dangerous corner. But I wanted to go faster through it. That was a lesson learned: You need confidence for a TT, but not too much. One mistake, and you will lose everything. You can lose like 1 minute or more during a crash in a TT.” In case of a crash, a mechanical failure or a flat tire, the riders have a spare TT bike on the team’s car that’s following them. “I even got an extra Garmin mounted on it because you don’t have time to change the device. Every second counts. The guys in the car are very focused as well; if something happens, they can change a bike very fast.”

When the race is done and dusted, it’s time for the cooling down on the Tacx trainer. Think of an easy spin of 20 minutes to loosen up the legs a bit. Urán prefers to use his road bike because he will ride on that again in the following stage. Afterwards, the team analyzes all the data in Garmin Connect™, but he sometimes wants to dive into this as well. “Especially when you’ve put out the big numbers, it’s good for the motivation,” he concluded with a big smile.