The numbers are officially in, and Oshkosh 2016 didn’t disappoint. According to the Experimental Aircraft Association, attendance was up approximately one percent from 2015 to 563,000 people, while the total number of show planes was up across the board – including homebuilts, vintage aircraft and warbirds. With nine product announcements and plenty of guest appearances, there was no shortage of excitement. Here are our top trending stories from #OSH16: 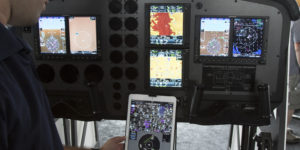 Our latest advancement in cockpit connectivity, the Flight Stream 510 MultiMedia Card, created buzz at AirVenture. We’ve taken our Connext ecosystem even farther, making database updates and sharing information across products in the cockpit even easier with our new Database Concierge. 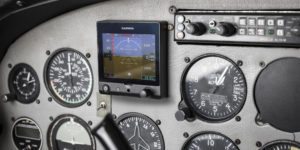 Our customers were asking for it, and we answered. Sunday before the show, we announced availability of our G5 electronic flight instrument for certificated aircraft. And not just for a few select aircraft types, but for more than 562 aircraft models. The wildly popular G5, which was initially released for the experimental market in April of this year, created a frenzy of interest in our booth with customers asking how soon they will be able to retrofit their aircraft with the new product. 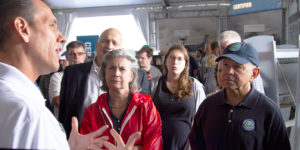 FAA administrator Michael Huerta stopped by our booth to check out the latest cockpit technology we’ve designed with the goal of improved aviation safety. Huerta spent much of his time at AirVenture visiting with manufacturers as well as discussing progress on recent hot button general aviation issues including Part 23 rewrite, third-class medical changes, and aircraft certification process changes. 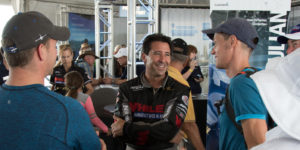 Red Bull Air Race pilots and airshow performers Michael Goulian and Pete McLeod took time out of their busy schedules to spend time with fans at the booth. Goulian, who was already on AirVenture’s airshow bill, signed autographs and spoke about his experiences with Garmin – including flying and cycling. McLeod flew down from Canada to do the same, spending a few days with us, visiting with fans, talking G3X Touch, and even taking over our Instagram account. He was also lucky enough to get a personal tour of the Garmin equipped Martin Mars water bomber, the largest flying boat in the world, operated by Coulson Aviation in his home country. 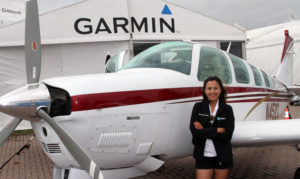 Ambassador Shaesta Waiz of Dreams Soar stopped by to update us on her upcoming journey around the globe in a Beechcraft Bonanza. Scheduled to finish her training in the next few weeks along with the final aircraft modifications, she hopes to takeoff on her adventure in about a month. She is the first civilian female pilot from Afghanistan and her mission is to inspire future aviators and professionals in all STEM fields (science, technology, engineering, math). Shaesta will take our Aera 660 portable GPS, Garmin Pilot mobile app, and DeLorme inReach satellite communicator.