In the Air Capital of the World – Wichita, Kansas – on the site of the former Boeing factory, an aviation icon has been brought back to life. A legendary Boeing B-29 Superfortress, named ‘Doc’, has been fully restored – a process 28 years in the making. This emblem of Second World War airpower combines 1940’s construction with new Garmin technology to power it toward its bold mission of serving as a flying museum that will travel the country.

Doc’s story began in March 1945, when it rolled off the Boeing Wichita assembly line and delivered to the U.S. Army. It served in various non-combat roles over the next 11 years until it was retired to China Lake, California to be used as a target for bombing practice. By a miraculous stroke of luck (or bad aim), over the next 42 years the B-29 managed to avoid destruction until 1987 when Tony Mazzolini and a group of volunteers discovered the airplane and began the rescue process. After 12 years of communicating with government agencies, Mazzolini and his team of local volunteers were finally able to take possession of the aircraft in 1998. The project was ultimately relocated to its Wichita birthplace in 2000 where a small army of volunteers continued the mammoth undertaking. And more recently, to oversee the final stages of the restoration process, a group of Wichita business leaders formed a non-profit organization, Doc's Friends in 2013. 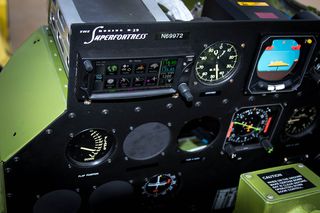 Despite Doc’s classic nature, it features very modern Garmin avionics. In the “front office,” dual GTN 650s will give the pilots combined GPS/Nav/Comm capabilities in a central location. Behind the scenes, dual GTX 33 remote transponders, linked to the GTN 650s, allow the pilots to enter squawk codes on the same unit that manages the NAV and COMM frequencies. A GDL 88 Dual-link Universal Access Transceiver provides ADS-B compliance as well as crucial traffic awareness and subscription-free weather.

Once completed, Doc will be one of only two airworthy B-29s in the world; it’s also the last known example capable of being restored to flight condition. The aircraft’s mission will be to Honor, Educate and Connect as it travels around the country appearing at airshows. All four engines were run for the first time in September, and first flight is expected within a few months after a recent, successful crowdfunding campaign.