First Civilian Female Pilot From Afghanistan to Fly Around World

If you were to ask 28-year-old Shaesta Waiz how she felt about flying the friendly skies ten years ago, she probably wouldn’t have had encouraging words to say. In fact, she would have said she would rather walk across the United States before getting in an airplane. But as pilots know, the power of flight can have a pretty amazing impact. In just a few short months as part of her Dreams Soar program, Waiz will be piloting a Beechcraft Bonanza solo around the world.

Waiz was born in an Afghanistan refugee camp and traveled with her family to the United States in 1987, where she grew up in Richmond, California. As a young girl, she believed she would get married at a young age and start a big family – with no expectations of pursuing a degree. Her first flight took place on a commercial airliner, with a great deal of hesitation, when she was 18 years old. However, upon touchdown, she knew aviation would be in her future, and immediately went to the nearest airport for an airplane ride. 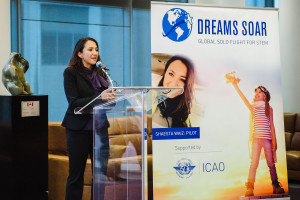 Today, Shaesta is a graduate of Embry-Riddle Aeronautical University, the first person in her family to earn a bachelor’s and master’s degrees, and the first civilian Afghan female to become a certified pilot. She started the Women’s Ambassador Program at Embry-Riddle – an initiative seeking to mentor and support young women pursuing an education in aviation and engineering, and to promote STEM (science, technology, engineering and mathematics) education.

On June 2, 2016, Waiz will be launching from Daytona Beach International Airport in a 2001 Beechcraft Bonanza A36. She will embark on a 32-leg journey, covering 25,195 miles, with each stop strategically selected based on the need for STEM outreach, to host an event aimed at inspiring women. Shaesta will be taking a few of our aviation products along on her journey, including our latest aera 660 touchscreen portable GPS, GDL 39 portable GPS receiver and Garmin Pilot aviation app. We will be following her and giving periodic updates throughout her route, stay tuned to our Facebook, Twitter and Instagram channels for the latest updates.