Chris has been a software engineer with Garmin for over nine years having worked within the aviation systems team prior to joining the Garmin Pilot iOS team in 2015. Chris has had a love for aviation since he was young and watching movies such as Apollo 13 and playing flight simulation games furthered his passion. Upon graduating high school, Chris attended an aviation camp at the University of North Dakota and chose to attend UND one year later where he pursued an aviation degree and pilots licenses up through his Certified Flight Instructor certification.

Below, we sit down with Chris and chat with him behind the scenes to get his perspective on Garmin Pilot and its latest feature set:

Q: We understand you were the lead software engineer for the new weight and balance feature, what inspired you to take the lead?

Chris: I was inspired to start with a “clean sheet” feature and work on weight and balance from the ground-up. I also enjoyed working on something entirely new that had not yet been integrated into an app like we have done within Garmin Pilot – its integration with flight plan data and the amount of information pilots have access to really exceeds what’s available within other apps today.

Q: How did you differentiate the weight and balance feature from other apps on the market?

Chris: We sat down with a list of applications that are on the market and asked ourselves, “How can we make weight and balance within Garmin Pilot better?” We assessed the positives and negatives of each application and took into consideration what customers were requesting. From there, we formulated ideas and made them come alive within Garmin Pilot.

Q: What feature within weight and balance are you proud of the most?

Chris: As a pilot and CFI, it was important to me to streamline the way our customers enter in weight and balance data and to use that information within the application to derive additional information, such as fuel required for a particular flight. This integration and many other features, are what separates Garmin Pilot from the other apps on the market.

For example, pilots can see at-a-glance how much fuel they can take after entering weight and balance data. Touching the “maximum fuel” button automatically calculates the maximum amount of fuel they can take without playing a guessing game on a calculator. The Center of Gravity (CG) graph is also helpful as it dynamically changes as pilots enter in data, there’s no more digging through tables and graphs because Garmin Pilot does the work for you! 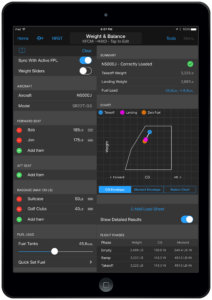 Q: What’s the best part of your job at Garmin?

Chris: I like having the opportunity to work on a variety of projects as there is always something new and different behind the scenes at Garmin. In my career here, I’ve had the opportunity to write and test software, build wiring harnesses, go flying in Garmin aircraft and interact with people throughout the world to better our products. Overall, the best part about my job is developing an idea, talking through how we can make it better and bringing it to life.

Q: What is the culture like on the Garmin Pilot team?

Chris: Within the Garmin Pilot team, we’re all very close even though we’re scattered all throughout the world. We have team members in Kansas City, Chanhassen, MN, Washington D.C. and even Romania. Even through the distance, we’re all very collaborative and more importantly, good friends.

Chris lives in Overland Park, Kansas with his wife, three cats and a puggle named Annie. When he isn’t dreaming up the next big Garmin Pilot feature, Chris enjoys playing video games, working out and spending time with his wife.

To learn more about the new weight & balance feature within Garmin Pilot, click here. Plus, if you haven’t already signed up for Garmin Pilot, take advantage of a 30-day free trial today!