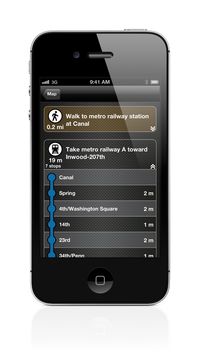 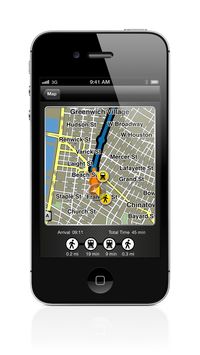 On the
heels of the release of iOS 6, Garmin today updated its NAVIGON
navigation app to add public transportation features, Apple Maps integration
and full support for the new 4-inch screen of the iPhone 5. A similar update
for the Garmin
StreetPilot Onboard iPhone app will follow soon.

Users can
simply select any address or point of interest in Apple Maps and they will be
offered the option to navigate to the selected destination using their NAVIGON
app[1]. Both the StreetPilot Onboard and the NAVIGON app feature onboard maps that
allow route calculations even in areas where cell coverage fades. Additional
premium features include comprehensive lane guidance, speed limit and safety
camera warnings, exit services, parking info, a trip planner and multi-route
display, among many other functions[2].

The NAVIGON
app will also fully utilize the 4-inch display of the iPhone 5, which makes it
easier to see all the details in the map view, such as speed limits or points
of interest. This comes in especially handy when depicting a lot of infromation at the same time, such as the map, lane guidance and speed limits.

With
Urban Guidance users are able to integrate public transportation into their
route, complete with detailed itineraries of transit stops. The
new feature considers trains, trams, busses and water taxis when calculating
pedestrian routes. Users will be guided to a transit stop by foot and be able
to look up detailed information on what line to take and where to get off. The new Last Mile function
automatically saves the location of the user’s car when continuing by foot,
making it easy to find it on the way back. To depict the user’s surroundings,
the upcoming Garmin StreetPilot Onboard app update will also include new
graphical features such as Google Street View and Panorama View 3D (in app
purchase). Learn more about these new features here.

The NAVIGON
apps are up to 25 percent off until October 3, 2012. The in app purchase Urban
Guidance is 40 percent off. The Garmin StreetPilot Onboard app will also be
available at a reduced price once the update becomes available.

[1] The NAVIGON app needs to be
installed on the user’s iPhone to be offered as a navigation option.

[2] Some features are only available for either
the NAVIGON or the Garmin StreetPilot Onboard app.