Today Garmin announced its automotive OEM product demonstrations for this year’s Consumer Electronics Show (CES) including Lenexa, a refined infotainment interface with tactile physical controls dedicated to specific functions inside a vehicle. Garmin first introduced Lenexa in early 2016 and has continued to mold and modify the system’s innovative design strategy. New test results incorporating usability and objective driver distraction data, reveal Lenexa’s influence as it significantly outperformed other systems that primarily depend on touchscreens, including head units running Apple CarPlay and Android Auto. The results prove to be essential as both testing samples – driver distractions and usability – continue to plague the automotive industry. A brief demonstration video showing Lenexa’s capabilities can be viewed here.

“Lenexa offers an intrinsic experience where drivers can use its controls with greater reliance on muscle memory and feel, while devoting far less time looking down to find specific functions,” said Kip Dondlinger, Garmin automotive OEM manager of product and user experience. “There really is no substitute for simple, physical controls that you can confidently operate by feel.” 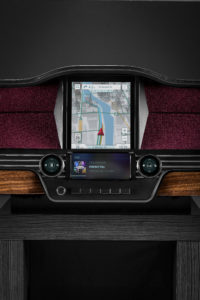 Lenexa’s design strategy uses tactile and dedicated controls for frequently used tasks while a vehicle is in motion. The two tactile knobs on the dashboard can be physically bumped in four directions, rotated and pressed. Additionally, the knobs contain an integrated display that can be optionally utilized during a drive. In most infotainment solutions today, vital functions are found in the touchscreen display requiring users to navigate through multiple pages to reach a specific control page. This can prove to be detrimental for drivers, as they are required to look away from the road to locate specific buttons. Meanwhile, Lenexa’s tangible control scheme relies on muscle memory development to minimize a driver’s need to glance away from the road. The dedicated controls provide “technology that can be felt” in order to navigate the system confidently and with ease.

The visual presentation of Lenexa can be interpreted as a modernized version of the classic two-post car radio with its two knobs, presets, and lower display. The media player knob found in Lenexa provides primary controls for all audio sources – including connected streaming services – while the communications knob enables quick access to contacts, phone, voicemail, and text message playback. Lenexa’s lower display screen, located between the two primary knobs, is non-touch and offers information related to media and communication features. In addition, Lenexa boasts a larger upper touchscreen that is primarily used for navigation. Garmin recognizes the need for a touchscreen display in certain occasions, such as map browsing or entering search terms with a keyboard. Navigation is most commonly used before driving begins, making a touchscreen interface acceptable for such circumstances. On the other hand, audio and phone functions are frequently used while a vehicle is in motion.

To test Lenexa across a range of demographics, Garmin followed protocol guidelines from the Alliance of Automobile Manufacturers (AAM) and National Highway Traffic Safety Administration (NHTSA) while using its driving simulator. Across the board, Lenexa tested better than the competition on average by a factor of four, including the case study completed for the critical TEORT (Total Eyes Off Road Time) testing phase. Questions administered to test subjects, after completing each system task, revealed that Lenexa placed a smaller cognitive load on drivers while also scoring higher marks for learnability and usability. 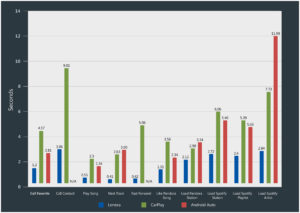 During CES, Garmin will showcase several new demos that include its latest navigation solutions for Mercedes-Benz and Honda Motors. In cooperation with Amazon, Garmin will also exhibit its in-vehicle integration of the Amazon Alexa voice service. Lastly, the company will also share additional concepts with OEMs, including a number of potential new wearable features for automotive with applications for ride sharing, customization and security.