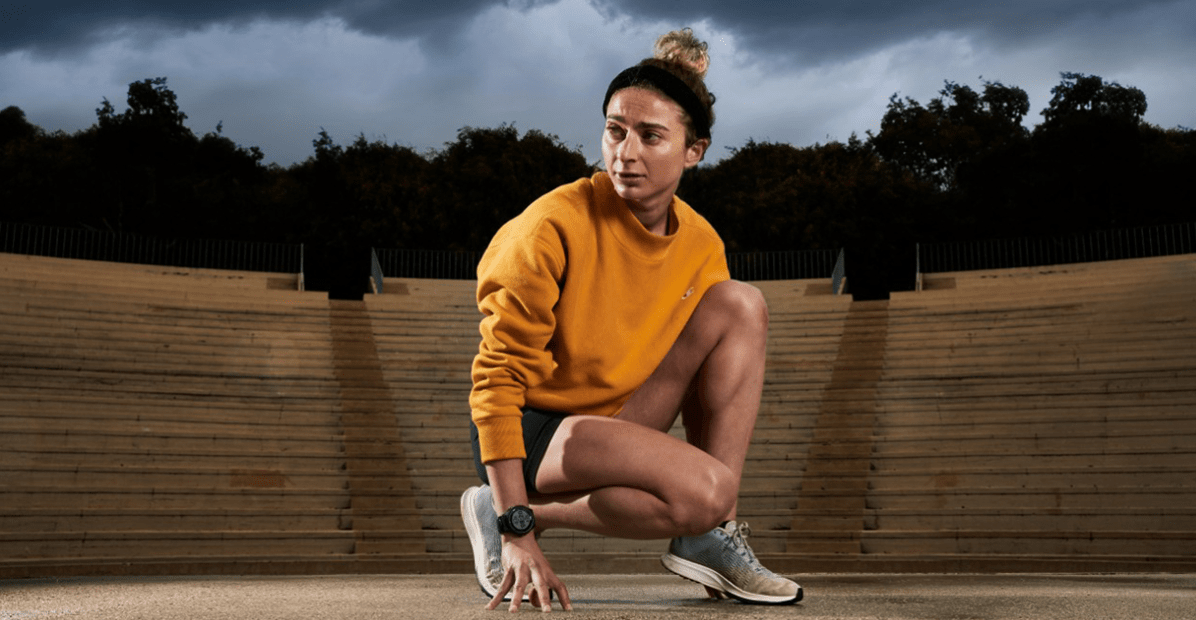 Olympic Runner Alexi Pappas on Mental Health: “Your Brain Is a Body Part”

Alexi Pappas couldn’t sleep. She had just competed in the 2016 Olympic Games in Rio (setting a national 10-kilometer record for Greece with a time of 31:36), and she was already logging 120 miles per week in a new high-altitude training program. By all accounts, she should’ve been tired. But she was averaging a single hour of sleep per night.

It was the first indicator, Alexi says, that something was brewing inside — a physical symptom of what would ultimately be diagnosed as a mental health disorder: depression. And yet, despite the constant monitoring of physical health that has become the standard for athletes, Alexi had no tools in her arsenal to identify what was beginning to happen in her brain. She didn’t know that by not being able to fall asleep, her nervous system was sending her an important signal — and so she ignored it.

Now years later, Alexi has been able to treat and manage her depression — and has come out on the other end of a dark time with an expanded understanding of mental health that she’s sharing with others. A recent opinion video she published with The New York Times called for a greater emphasis on mental health in professional sports, and it quickly went viral. She plans to keep that momentum going with the release of her book, Bravey: Chasing Dreams, Befriending Pain, and Other Big Ideas, from Random House in January.

In the meantime, the Garmin-sponsored athlete is sharing her experience —and advice — with anyone who’s willing to listen. “The brain,” she says, “is a body part.” It’s that simple. To expand the mental health conversation, we’re going to have to reframe the way we see our brains.

Listen to your body.

Some problems may start small — like not sleeping well for a night or two — and snowball into something more serious.

“It’s called falling asleep for a reason,” says Alexi. “You have to let it happen, not make it happen. I was trying to make it happen, and I didn’t understand that was a red flag. I was trying to train at 120 miles a week with one hour of sleep; clearly that’s crazy.” Sometimes, of course, you just have an off night; you add in an extra cup of coffee in the morning, and it’s no big deal. But if something is continuously keeping you awake, don’t ignore that, she says.

There are other ways in which your nervous system may let you know something is wrong. Alexi says that sometimes it may be as simple as an unusual breakout — just a small sign that your brain is overworking, and you may need to take a pause and determine whether you might be a little over your limit.

If you can, be proactive in getting help.

We can’t always see the problem ourselves. “For me, it took somebody else seeing it,” says Alexi. “I wasn’t even (present) with my dad in person. I was trying to speed up when I should’ve slowed down, and I think he noticed that I was moving a million miles an hour when I probably needed to pause. And I think that message is the most essential for people. I didn’t know. Now it seems so obvious, but I really didn’t have this vocabulary at all. So I was speeding up instead of slowing down, and I think he noticed that on phone calls. He would ask, ‘What’s going on? What are you doing? What’s your plan?’”

Alexi’s mother took her own life when Alexi was young. When she started to display signs of depression, her father was able to recognize that she needed help. While Alexi was still in denial, he and her brother made her appointments to see a mental health professional.

“I don’t think I was ready to ask for help at the time, and I’m really grateful they did,” she says. “But what about the people who don’t have a dad like I did? Or the experience? What are they supposed to do? Our society has to embrace this. This comparison between the physical health and the mental health – it just makes so much sense to me. Had I known that earlier, I probably would’ve been more proactive.”

Healing will not happen overnight.

It may not be linear either. While it may sound funny at first, Alexi compares her process to that of a slow cooker. “Let’s just say it’s for Olympic training. You’re putting in your mileage, your sleep, your nutrition — it all goes in, and it’s going to take a long time. You’re going to put in the work every day, and it’s not going to show up until maybe at the end when you turn the soup up.”

“I see myself as a [slow cooker] of sorts in this scenario, where I wasn’t exactly sure what ingredients and ratios — you never know what in your physical training is the thing that brought you over the edge in a good way. And similarly, with this, I didn’t know exactly what combination of ingredients were going to help me, but I did know that if I didn’t try to put those things into the slow cooker and give them their time to work …”

Alexi’s doctor told her she might be sad every day for a very long time. That’s not the case for everyone, but her depression was high risk, she says.

“I was told I’d feel sad every day for a very long time, and that didn’t mean it wasn’t working. So I was less surprised that I didn’t feel better overnight, and once I accepted that, I stopped being offended by my own emotions and started focusing on my actions. Because your actions are what change your thoughts, and your thoughts are what change your feelings. So basically, your feelings are going to change last.”

Alexi says it’s taken her a bit to find the words, but she’s hoping that her own steep learning curve with mental health will help others. “Working with The New York Times was really helpful, because it’s one thing to experience something yourself and to save your own life, and it’s another to know that it gives somebody else the tools to choose to help themselves.”

And while the professional athletics community is starting to acknowledge that mental health issues exist, she’d like to see the conversation evolve more toward what to do about them.

“There’s not been as much conversation about what can be done about it rather than just blaming the dream. There was a lot of emphasis put on Olympians having depression as if it’s the Olympics’ fault, but actually I think I could’ve been prepared 10 years ago so that when I got to my big dream phase, I was a better equipped person. So I think the motive here is to expand that conversation that has been really well started — push it one step beyond.”

“I feel right now the privilege and responsibility to do what I can to help move the needle. It would be really nice to help people not go through what I went through — similar to how I imagine people were with physical injuries 20 years ago. It wasn’t commonplace that your dad went to PT 10 years ago. Now anyone — kids, parents, your grandma, Olympians — everyone can go, and it’s pretty normal. It was really not always the case that people took care of their bodies the way they do today, and perhaps we can move ourselves in a direction where it’s a similar approach to the brain and the mental health stuff.”

Alexi Pappas is a Garmin-sponsored athlete and wears a Forerunner® 745 to track her body’s metrics. “It does give you a lot of help knowing what’s going on,” she says, noting that sometimes people have trouble admitting that something is off. “But if you get some data, you can really lean on that, almost like a coach. Sometimes we’ll stretch ourselves to our outermost limits, but if there’s something objective, it’s super helpful.” To learn more about Alexi and her career, click here.